The other day there was a tweet that led to an article about THE MAP THAT CONVINCED LINCOLN TO FREE THE SLAVES, and even without clicking on the link I knew what map they were talking about:

I had stumbled across this map in the Library of Congress’s online files several years ago, and I used it to develop a lesson for 5th graders on how to read primary source documents.

For the lesson, I came up with the following chart:

I printed up enough copies of the map for every two students to have one; I had a large format printer, so they got something close to the original size.  Then we started. 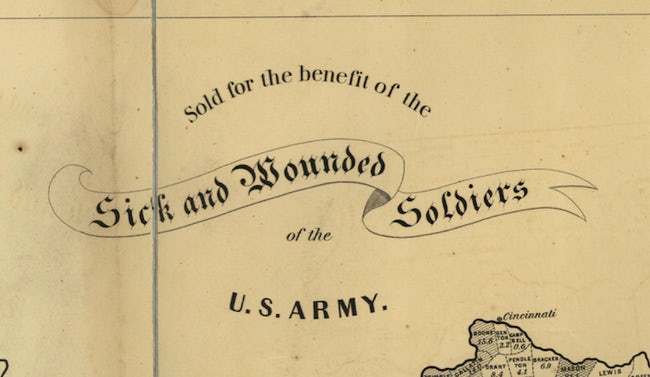 We looked at the scale:

We found Coweta County on the map: 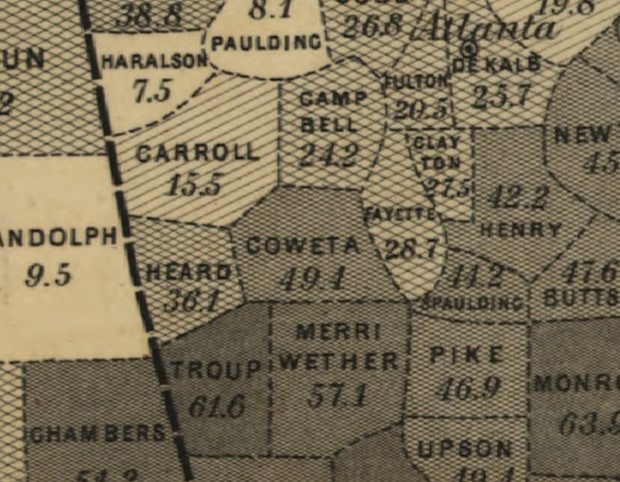 We talked about the number in Coweta County: 49.4% of the county’s population was slaves.

We discussed what the Census was.

I remember asking them whether it looked as if the slave population were evenly distributed across the south, and they were quick to say no.  When I asked if they could explain the patterns of light and dark, they immediately told me that it was pretty clear that the heaviest slave populations were where cotton and rice were grown, i.e., plantations. I was impressed.

Next I asked them to tell me what they knew about the U.S. in 1861: the nation was at war, the Confederacy vs. the Union.  The Union was not doing well in battle; the war was not popular. Abraham Lincoln was President. The South was largely rural/agricultural, and much of that was supported by slavery.

I showed them Article I, Section 2, Clause 3 of the Constitution:

Representatives and direct Taxes shall be apportioned among the several States which may be included within this Union, according to their respective Numbers, which shall be determined by adding to the whole Number of free Persons, including those bound to Service for a Term of Years, and excluding Indians not taxed, three fifths of all other Persons.

We talked about the 3/5s Compromise and what that meant. I directed them to the computers — I ran a 21st century media center — where I had prepared a HyperCard stack for them to use the census data to calculate how many congressional representatives each southern state got based on their free populations as well as “all other Persons.” (We discovered that the southern states gained an extra 25 representatives based on a population who could not vote and who were not actually citizens.)

The crux of the matter: why did this map exist?

Part of the answer is the piece at the top about the map being sold to support the sick and wounded soldiers of the U.S. — it was an appeal to patriotism, underscored by the title of the map: this was a map of the southern states of the United States. (Confederate States of America? Pfft.)

And by linking the reminder of sick and wounded soldiers to the southern states, the map was driving home the point of the war: the southern states had seceded to protect their Peculiar Institution, an institution that had given them an unfair advantage in Congress since the drafting of the Constitution 75 years before. 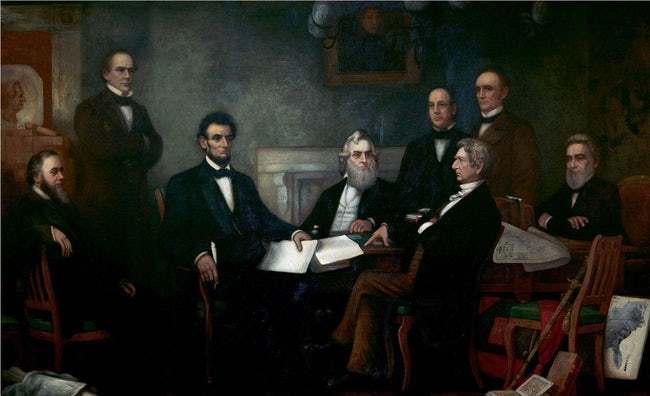 Students then given the following assignment:

Your task is to persuade a friend to buy one of these maps. You are a young person living in Philadelphia in 1861, and one morning in October you happen to be walking by H. Long & Brother Booksellers when you notice this map in the window. You immediately realize what the maps have to say about the reasons for the war, and you go in and buy one to support the war effort.

Now you want all your friends to buy one, too.

Write a letter to your friends to convince them of all the reasons they need to buy one of these maps. Instead of writing a letter, you may give a speech.

Use the front and back of the next page to write your letter or to organize the notes for your speech.

Results were varied, as you might imagine; this is not an easy assignment, to translate all the things we learned into a personal narrative.  But it’s the kind of assignment that schools should have been doing and should be doing: it’s not just a creative writing exercise, it’s an assessment. The student demonstrates what he/she understands about the map in a rather complete way.  Yes, I had an objective test that I gave students as well, but that was just a formative assessment to double-check their knowledge/understanding before they wrote the letter. Yes, the lesson took longer and was more involved than simply standing in front of a class and telling them what the map meant. But it allowed the learners to construct knowledge, and in my charter school that will be the name of the game.

By the way, this is what my 21st century media center looked like: 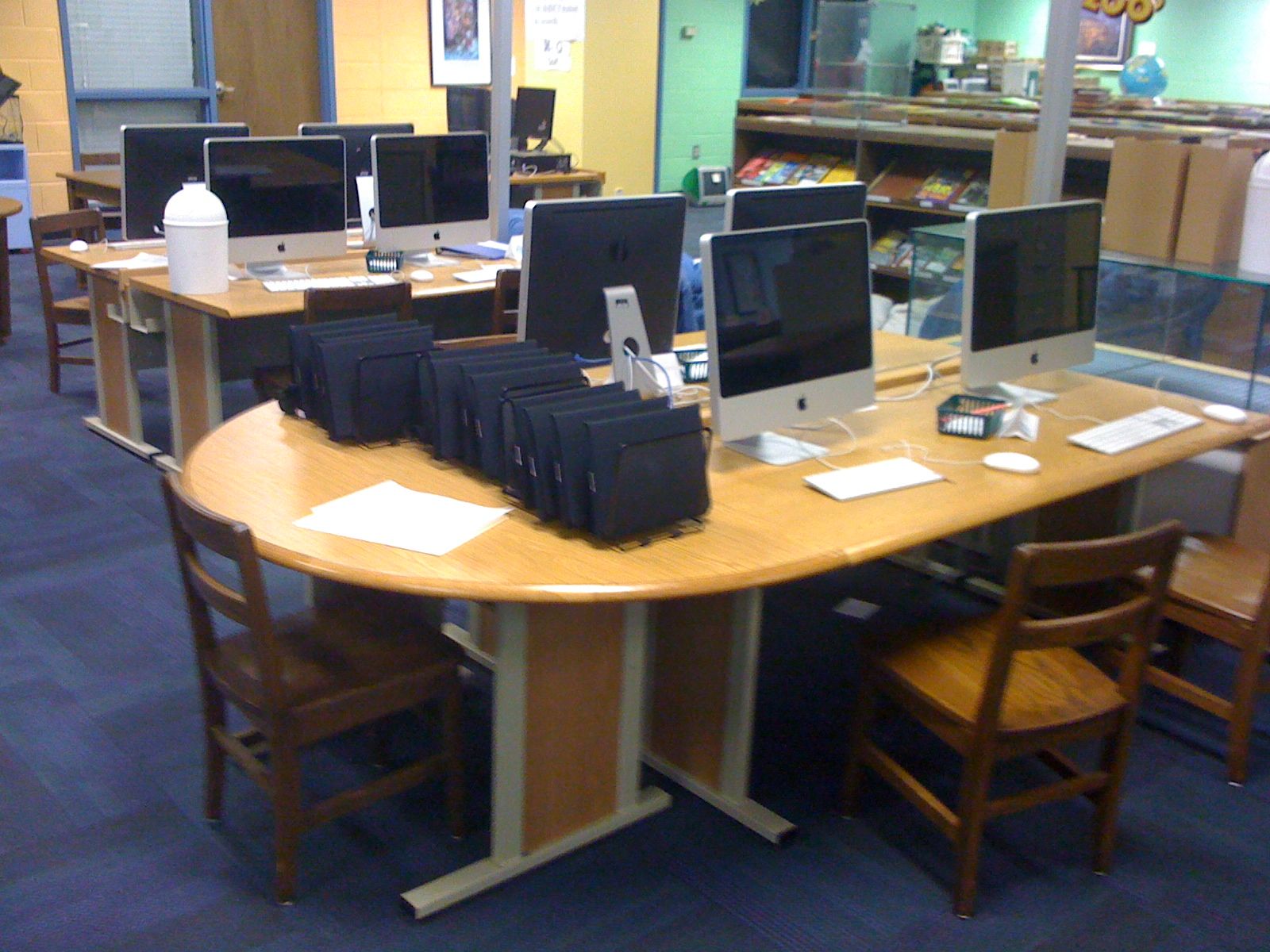 UPDATE: Since there’s been some interest in this post, I thought I should circle back and include the “checbric” we gave the students.  (“Checbric” is one of those ugly coined terms from back in the day, a combination of “checklist” and “rubric.”)

____ when and where you bought the map

____ why your friend (the reader) should buy the map

Your letter/speech contains an explanation of

____ the reasons for the war shown on the map