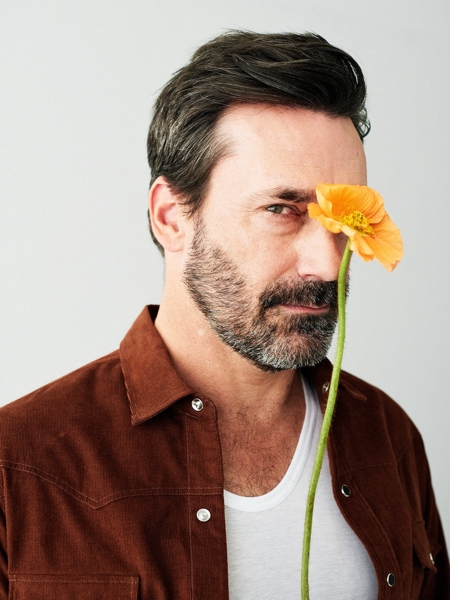 Not the photograph, certainly.  This is the inestimable Jon Hamm, star of Mad Men and general all-round very handsome guy. (Personally I value his talent for comedy over the much-vaunted Mad Men.)

No, the offensive part of this is the shirt.  It’s made by some concern named Berluti, and it costs $730.

The New York Times did a profile of Mr. Hamm—can I call you Jon?—which was innocuous enough: he talks about his rehab, his recent movies, and the death of his dog.  A general puff piece for Baby Driver and the upcoming Marjorie Prime.[1]  And salted throughout are the typical fashion shots of a good-looking celebrity wearing nice clothes comfortably.

(It was noted that Jon was wearing his own jeans, label unidentified.)

I don’t know about you, but I doubt the contents of my closet add up to much more than $1,795 and they are certainly not equal to the $7,995 jacket.  If I were ruthless and gave away all the suits and jackets and dress shirts/slacks/ties that I am not likely to wear any more, my entire wardrobe could be replaced for less than $1,000—and even that’s excessive in my eyes.[2]

My Lovely First Wife and I have often tsked over clothing like this through the years and joke that even if we won the lottery we’d never pay that much for clothes, and I like to think we mean it.  Because in our souls we know that to pay $1,795 for a t-shirt means that you have so much money that cost means nothing to you.  Money means nothing to you, and that’s dangerous in a world where money means life and death for most of the people in it.

Yes, paying more for an item because it’s well-made and likely to last makes sense. (See the Sam Vimes ‘Boots’ Theory of Economic Injustice.)  But paying $200 for a jacket that will last you 10–20 years is one thing; paying $7,995 for a jacket because it has a specific company’s name on it—that’s problematic.

So when you hear the Republican Congress talk about “tax reform,” understand that what they really mean is cutting the taxes of the richest among us: giving more money to the people who can and will pay $1,795 for a t-shirt.

[1] Marjorie Prime is a play I have proposed directing at NTC since it premiered; it is not yet available for the likes of us.

[2] Although I will confess that the zippers on $10 shorts from Rose’s are not well-made.  So I’ll pay $30 for decent shorts—but not for a t-shirt.

One thought on “This is offensive.”