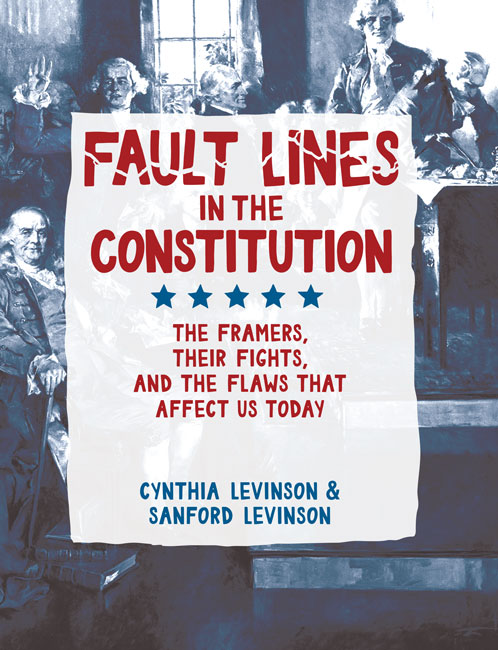 Last Friday I had occasion to visit Peachtree Publishers in Atlanta and meet their president Margaret Quinlin.  She gave me a copy of their newest big publication, Fault Lines in the Constitution: the framers, their fights, and the flaws that affect us today, by Cynthia Levinson and Sanford Levinson.  It is a triumph and this is a rave review.

The book is aimed at the middle reader, but as far as I’m concerned every sentient being in this country[1] should read it and discuss it everywhere.  The authors are thorough, honest, and more than a little skeptical about the solidity of our governing document.  They have reason to be.

A little background: back in 1987, at the bicentennial of the Constitutional Convention, the Newnan-Coweta Historical Society asked the Newnan Community Theatre Company to come up with some kind of presentation/performance for them that addressed this epochal moment in our history.  It fell to me as artistic director at the time to devise the entertainment.

That summer, at GHP, I read the complete The Records of the Federal Convention of 1787, compiled and edited by Max Farrand.  Even though the delegates worked in absolute secrecy and the recording secretary burned all deliberations, James Madison kept copious notes (which he edited selectively later in life).  To this document, Farrand added all other diaries/letters/correspondence that he could find, and the result is a fascinating read.  Those men argued over everything: every word, every comma, every idea.

The point is that the Constitution we ended up with was by no means foreordained.  In fact, the eventual performance piece NCTC came up with asked the audience members (seated in groups relative to the size of the thirteen colonies) to decide the nature of the Executive, and both nights they dumped our current arrangement in favor of a single executive elected for a single term of six years.  Expecting a worshipful experience of a perfect document, they were surprised and delighted to be shown there was more to it.

Fault Lines covers this concept of argument and compromise brilliantly.  Each chapter follows the same outline:

The final section is the most agitating, in every sense of the word.  The authors grade the Constitution and how well it has delivered on the promises in the Preamble.  (It gets an overall C+.)  Then the authors, responding to James Madison’s comment that “it is incumbent on their successors to improve and perpetuate it,” list some very uncomfortable ways we might go about doing that:

Finally, the authors have a one-on-one debate as to the wisdom of going full Leeroy Jenkins with a Constitutional Convention to upset the entire apple cart.  It’s enough to keep you up at night, which at this point in our history is saying something.  (I should say that the book is very current, referencing the current administration and some of its actions.  The section on the 25th Amendment is particularly pointed and reflects some of my own writing, here and here.)

So, teachers, want a resource to celebrate our annual MANDATED CONSTITUTION DAY LESSONS COMRADE[2] on Sep 17?  Requisition a classroom set of this bombshell and watch the children’s minds crack open.  And probably their parents’ heads explode.

[1] I am aware this does not include everyone in this country.

[2] I’m actually in favor of requiring the study of the Constitution, just probably not in the way that the über-patriots who have mandated it intended.