When last we left our Viking River Cruise up the Danube, we had left Vienna and sailed to Krems.

I forgot to mention that the day before, on Mother’s Day, the captain gave roses to all the ladies on the ship: 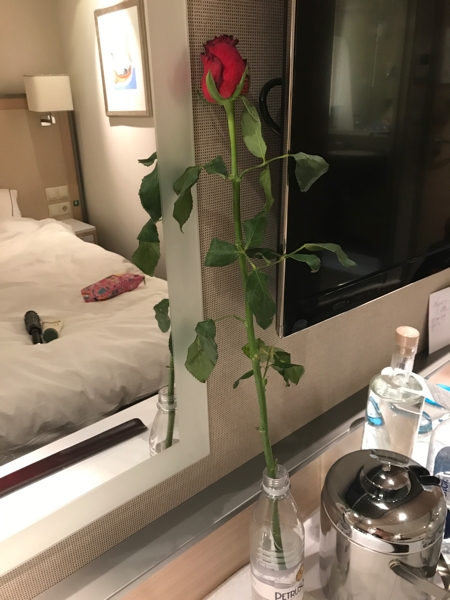 Here’s a photo of our ship, the Viking Tor, docked in Krems. 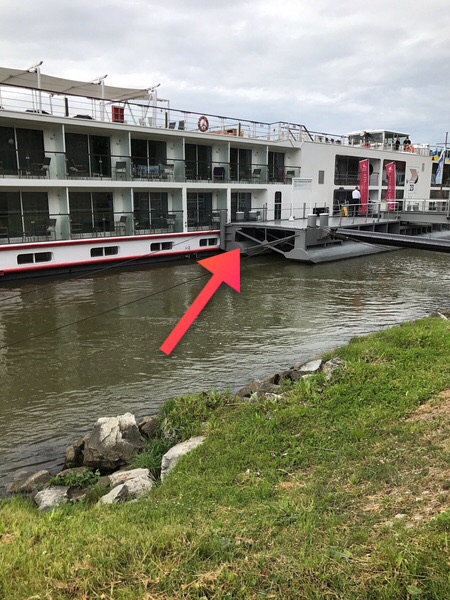 The red arrow?  That’s our stateroom.  We laughed when we woke up to find ourselves behind the dock.

And of course, as soon as we stepped off the ship we were on Hofvonsteinian soil.  (I will admit to an embarrassing geographical ignorance: I assumed that the Danube was the boundary between Austria and Slovakia/Czech Republic, but of course it’s not.  It’s over in the mountains somewhere.)

The morning’s trip was to Göttweig Abbey.  I have no longshots of it because I was on the wrong side of the bus.  Here’s one I stole from Wikipedia: 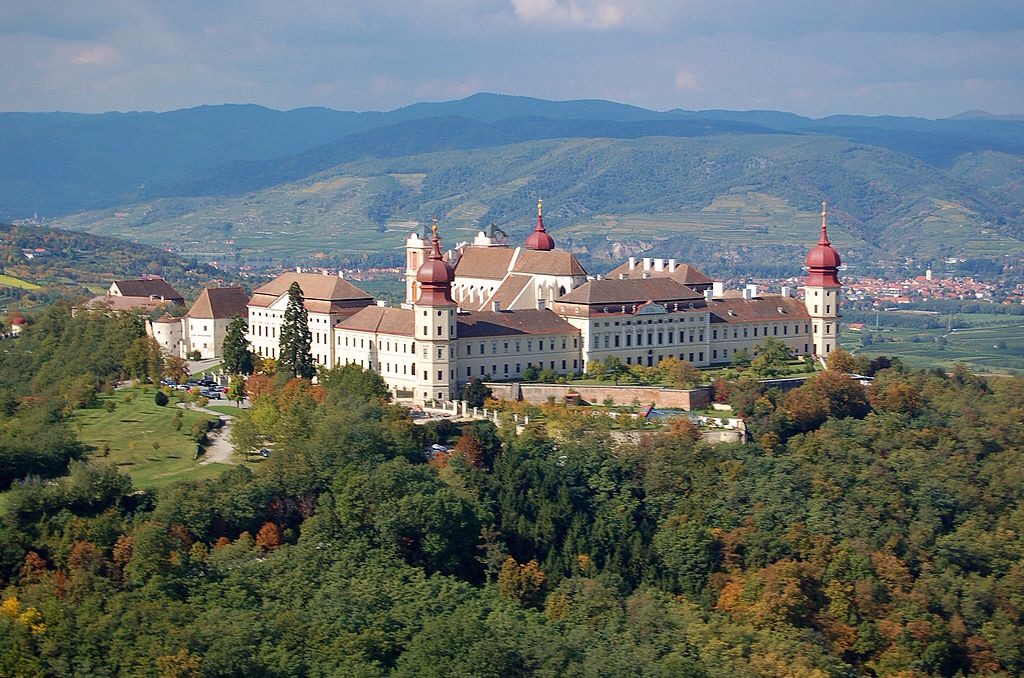 It’s pretty spectacular.  It’s a Benedictine Abbey founded 900 years ago.  Today, they produce wine and a host of apricot products including wine, sparkling wine, and liqueur, which we probably bought.  Also jams and bath salts and other stuff.

First though I had deal with this: 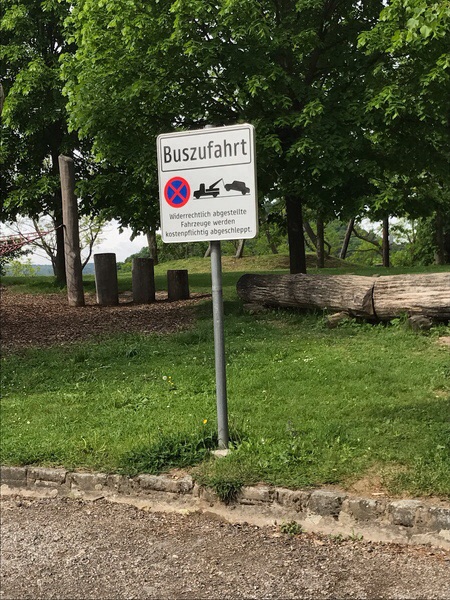 Some in my party became extremely amused by this sign, even though it clearly just says “Bus Lane.”  Some people. 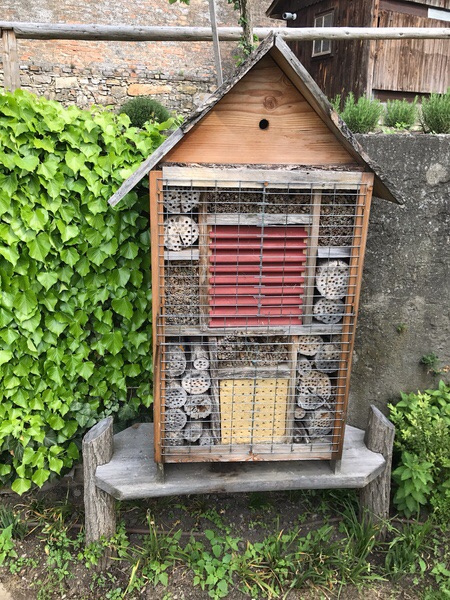 This was in the small garden/orchard at the front.  It is in fact a bee hotel, and I knew what it was because my friend Richard was making a whole bunch of them out of bamboo as an art project for the Euphoria burn.  This one is more elaborate, but the concept is the same.

We began following our tour guide toward the abbey gate, and as we walked I looked over and saw circles of cobble stones, and lo! 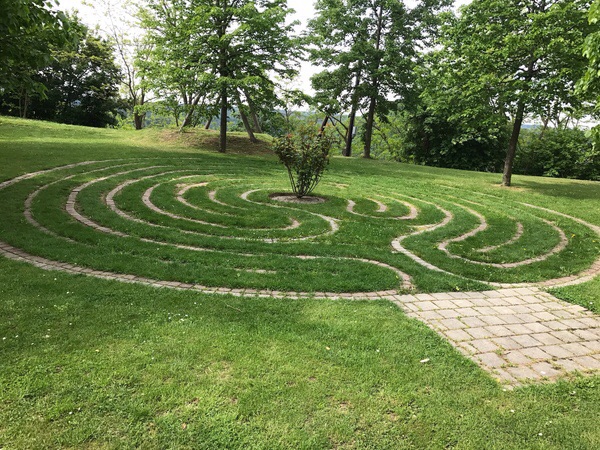 It’s rather new, only a couple of years old. It’s a little smaller than mine, but it’s the same seven-circuit pattern.  The center is a rose bush.

The view from the abbey is all-encompassing, and they own almost everything you see. 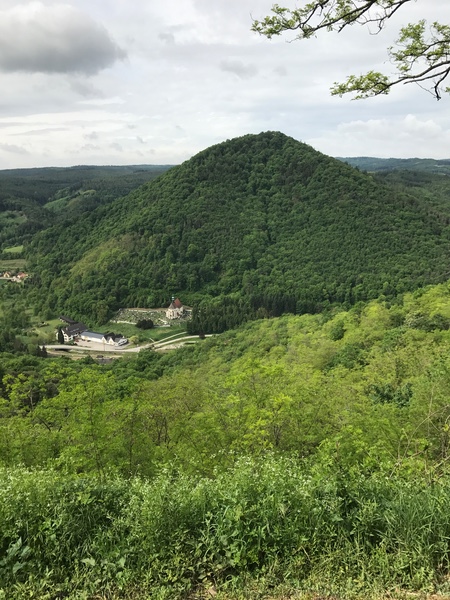 They have a winery, but mostly they grow apricots.  Lots and lots of apricots.

Inside the gate, you are met with several large and beautiful buildings, most from the 18th century. 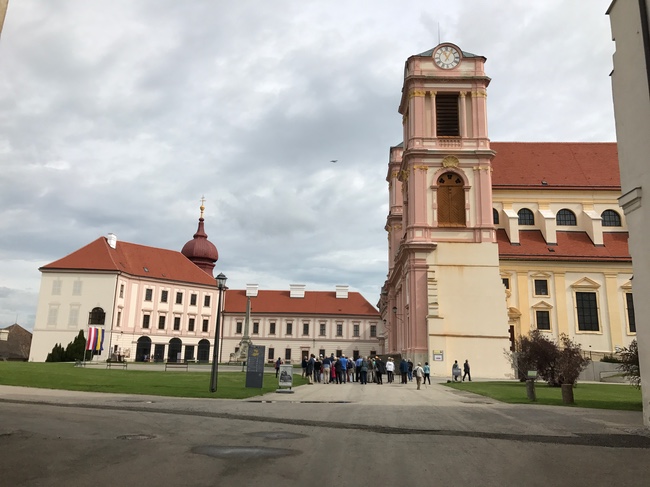 On the left is the Imperial Apartments, built because the Emperor (or in this case Empress Maria Theresia) had the right to stay there, which she did only once.  If you look closely at the windows on the far left façade… 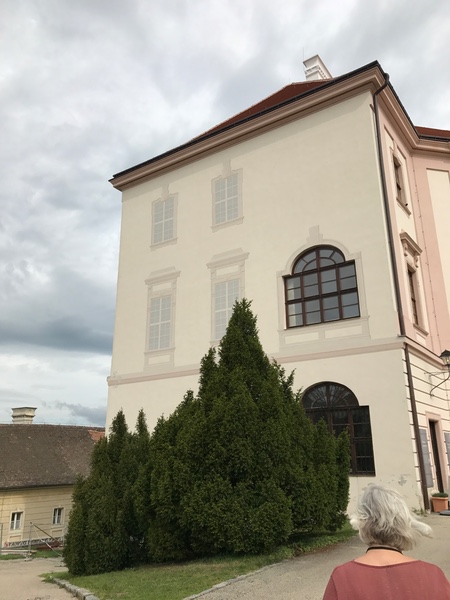 …you’ll notice they’re painted on.  That’s one way to save money, both in construction and in taxes.  For reasons unknown, many taxes were based on the number of windows you had.  (In Paris, a similar tax on the number of floors in your home led to the Mansard roof, which claimed to be an attic, not a floor.  Everyone politely looked the other way, kind of like the whole idea of the Hapsburg Austria-Hungarian Empire.)

Inside, it’s about as lavish as you might expect an Imperial Apartment to be.  The staircase, for example: 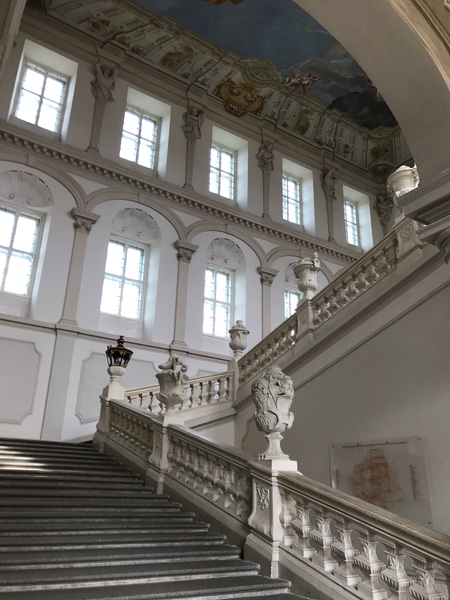 The stairs are extremely shallow and difficult for us 21st century types to navigate.  They are presumably easier if you’re wearing high heels and restrictive clothing, such as corsets and paniers.

The ceiling of the staircase: 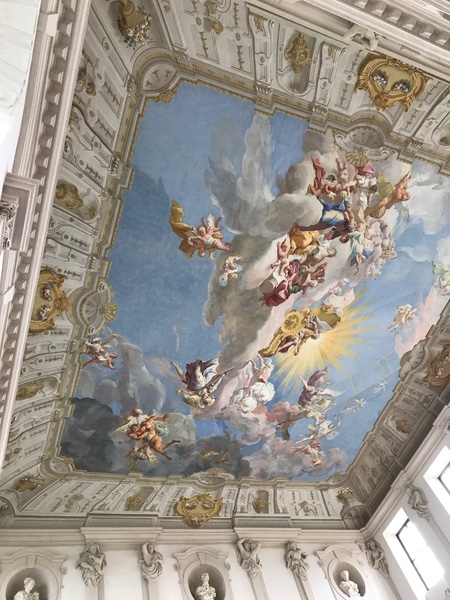 A masterpiece of trompe-l’oeil, it is actually only about fourteen inches deep.  The decorations overall are seriously Classical pagan, which is a measure of the power the liberal Maria Theresia and her son Joseph II (“Too many notes, Herr Mozart, too many notes!”) had over the church within their domains.  Another measure is the church itself, which I noted to the tour guide had an impressive dome in a contemporary etching.  Ah, she said, they were not funded for the dome and it was never built.

A lovely chambre in the apartments: 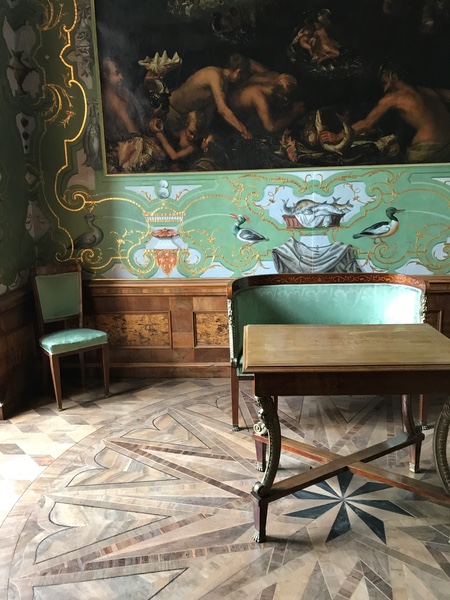 The floor is marquetry, all wood.

The church is a simple, noble baroque structure… 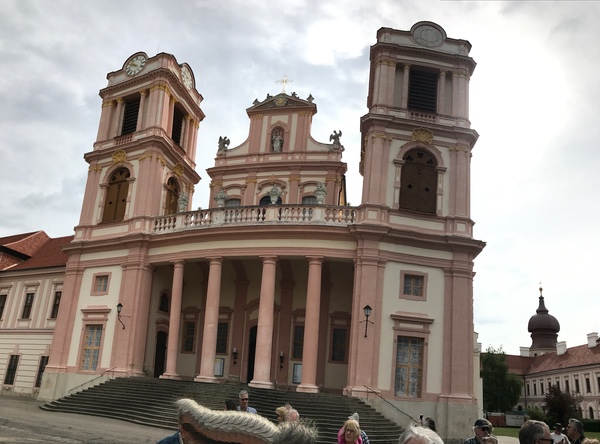 …until you get inside. 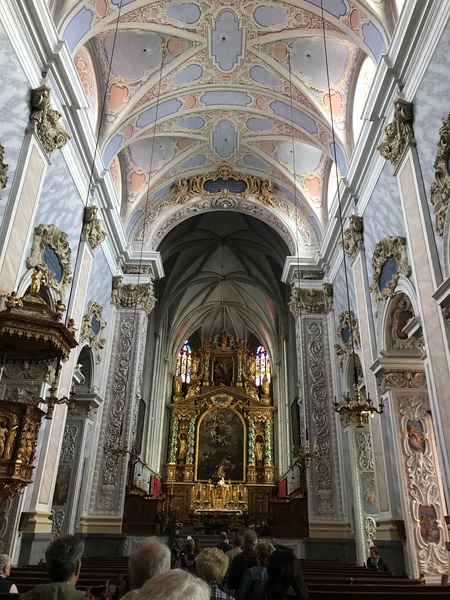 …where it is no longer simple.  Actually, as these things go, it is fairly restrained.

The altarpiece is typical: 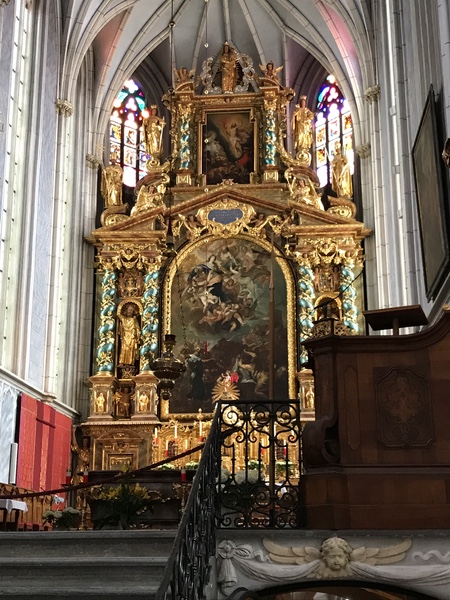 All in all, the abbey (of which I have tons of photos) was one of our favorite places on the trip.  It had a serene atmosphere, secluded as it was on its mountaintop.  It is a Benedictine abbey, which means that the brothers must all earn their keep, which they do by supervising the apricot orchards and their products; working/leasing the vineyards; and managing the forests.

We exited through the gift shop, buying plenty of apricot products: jams, chutney, apricot sugar (for cocktails!), and a bottle of their apricot liqueur, which I will also use in cocktails.  (More than a few from Vintage Spirits & Forgotten Cocktails call for it.)

Back on board, we set sail up through the Wachau Valley, which Soren narrated for us as we went.  It was chock full of fun things like abbeys and ruined castles: 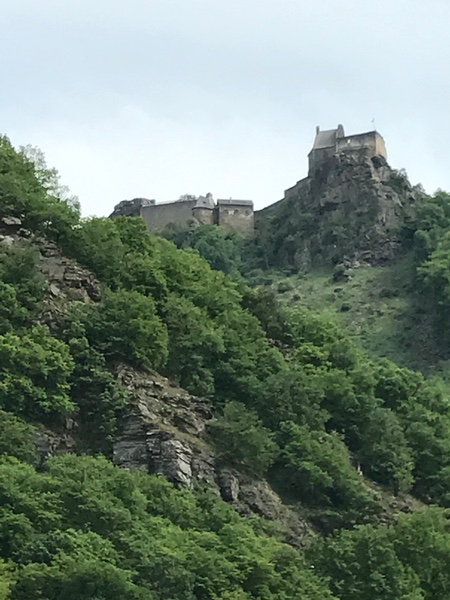 This one held Richard the Lion-Hearted captive until he was ransomed by his jongleur.  (The way it was said made it sound like his vassal lords didn’t give a rat’s ass that their liege was being held by the Austrians.) 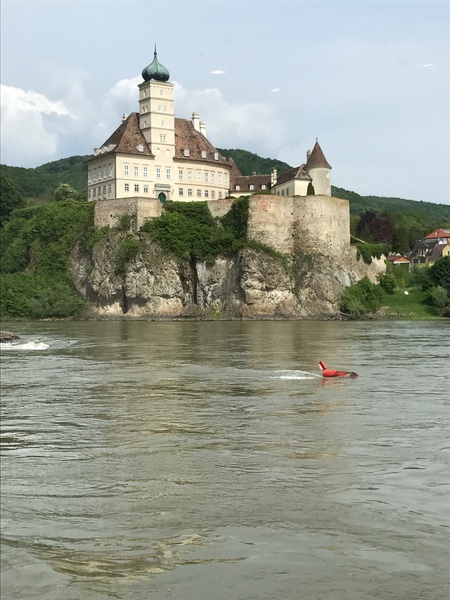 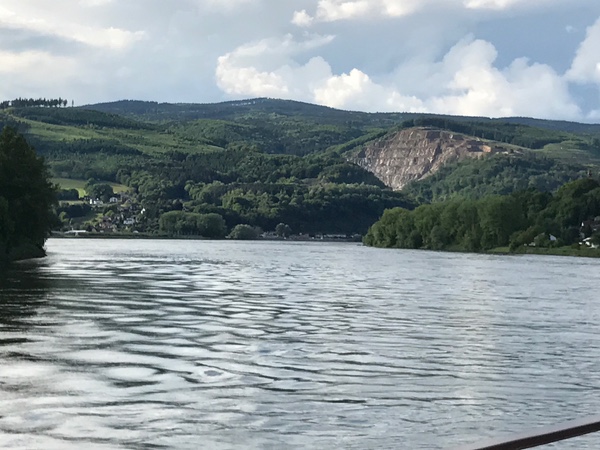 The scenery both fore and aft was lovely, and you can see the weather was glorious.  I ended up napping on the sun deck, awaking as we approached a lock to find this school looming over me: 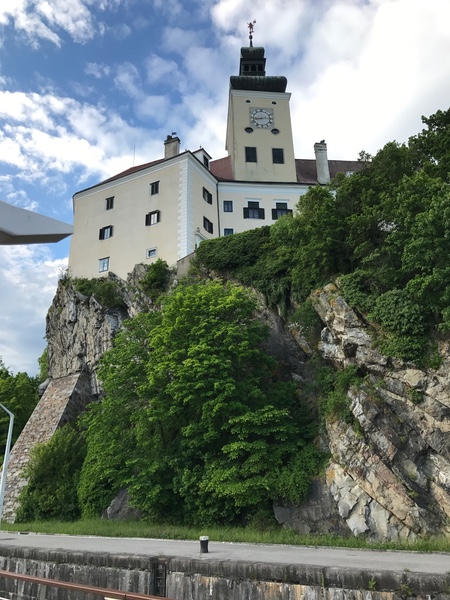 On we sailed, through the sunset and night, towards Passau. 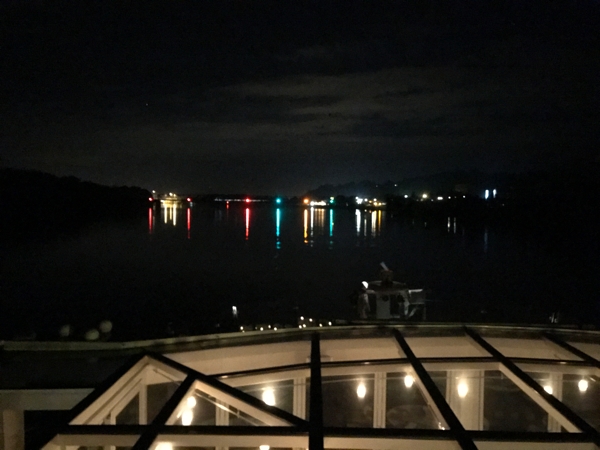 It was pointed out to me that I omitted one of the sights in the Wachau Valley: Willendorf, where archaeologists discovered the Venus of Willendorf.  The site is now marked with a little monument: 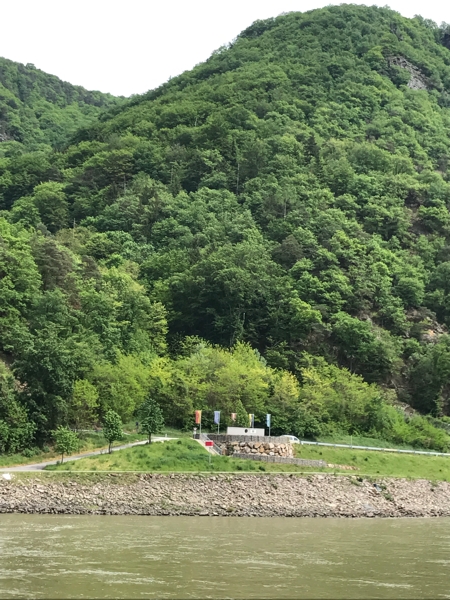