It’s not often you can escape the loop of he-said-she-said-nuh’UH when it comes to the evidence available to us these days.  All those screaming memes on Facebook, convinced that Those People Did This THING, Can You Believe It??

However, this recent foofaraw over the attendance at the Current Occupant’s installation has given us a break out of the endless loop.  Let’s recap.

Soon after the installation, this little image started popping up all over the intertubes: 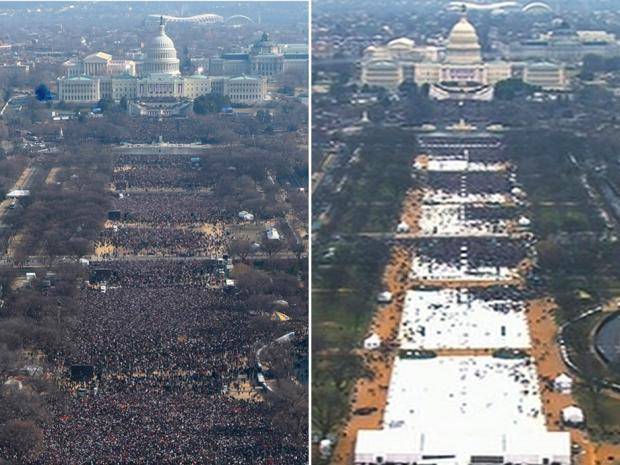 Look, it said: on the left, Obama’s 2009 inauguration, and on the right, the Current Occupant’s.

That’s a pretty stark difference.  Incredibly stark.  Unbelievably stark (but I repeat myself).

Once again, boys and girls: Remember the Lyles Rule of Internet Fuppery: If it’s too outrageous to be believed, don’t believe it.

So my first inclination was to think, you know, I’m thinking that second photo must have been taken much earlier in the morning, before all the loyal Trumpsters found their way out of the Metro and into the daylight.  Of course, the Capitol faces west, and we can already see that the second photo was at least taken… after noon?  So maybe this is after the Trumpsters wandered off?

We will pause a moment here for a short lesson.  That’s what you do, folks, when presented with evidence that makes you cock your head to one side.  You go try to verify it.

But all the evidence confirmed that, sure enough, the man claiming to have swept the election in a “historic landslide”[1] couldn’t even fill up the Mall.

Reaction was predictable.  The photo was taken earlier/later in the day.  (It wasn’t.)  Trumpsters, being the respectable, god-bothering, horny-handed laborers that they are, had to work at their jobs (THEIR JOBS, KENNETH!) and therefore couldn’t attend the coronation.  (Pffft.)

Still, there was no way of knowing, was there?  Hold that thought, we’re going to come back to it in a big way.

Then, I accidentally found this:

And there you have it.  The entire day, in time lapse video.  VIDEO, KENNETH.  No editing, no chicanery, no claiming that a 10:00 am photo was at the moment of actual inauguration.  Even your racist aunt can see that the Mall never filled up.[2]

The reaction by the Current Occupant was completely predictable.  Obsessed with ratings, he went into a rage (which as late as yesterday had still not subsided) about the lying media out to get him blah blah blah.  He sent out his poor press secretary to throw a tantrum in his stead, and Sean Spicer was immediately eaten alive by the world at large, including by people whose job it is to be on his side.

That was followed by the infamous Kellyanne Conway “alternative facts” appearance on Face the Nation, and off we went.[3]

Is this important?  The answer depends on the antecedent of “this.”

However, if “this” is “What kind of relationship to the truth does the current administration have?”, then we have a real problem.

Let me preface this part of the post by saying that we should all keep in mind the principle of Trump’s Razor, i.e., the safest bet where Trump is concerned is the stupidest possible answer.  It’s entirely possible that neither he nor his minions (or puppetmasters) are doing any of this on purpose.

It’s also entirely possible that doesn’t matter, because the damage is going to be the same.

First, the whole #AlternativeFacts thing is not a new phenomenon.  All the way back in 2011 we had Sen. Jon Kyl (Guess which party–AZ) to kick around with his “not intended to be a factual statement” bullshit.  And as I said at the time, what the hell was it intended to be, then?

The answer is that it was intended to manipulate the minds of listeners, and it still is.

And the manipulation it intends is to make you a) doubt whether anything is true; and b) not care one way or the other.

This post is too long as it is, and so to explain my point I’m going to send you off to read the following two articles:

Go.  You have reading for homework.

[3] If nothing else, these events seem to have shaken our news media out of their stenographers‘ dreams.