One of my Lichtenbergian proposed efforts for this year is to develop a writing/writers program at Backstreet Arts.

As with any major project, I have a Waste Book: 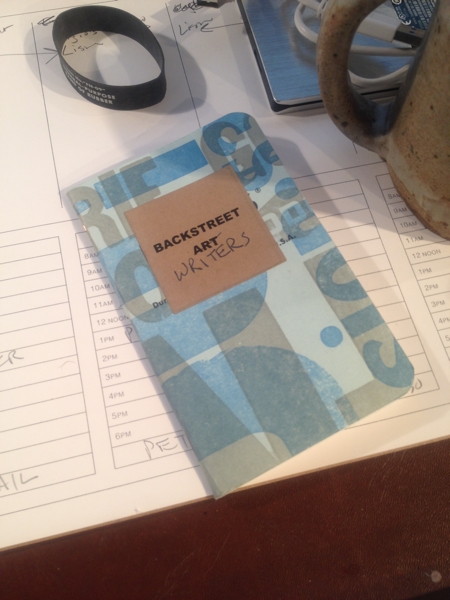 I began it back in 2015, on a camping trip on a sweltering couple of days in July.  Kim Ramey and I had been talking about her dream of establishing a free art studio for homeless/underserved populations, and several streams of thought had begun to merge in my life that led me to this goal.

The first was the realization that my life was no longer governed by cycles, e.g., the school year, the GHP cycle, the theatre season.  I no longer knew where I would be and what I would be doing a year in advance.  My life was now linear and it was up to me to plan it.

The second was an exhibit we saw in Asheville that featured the publications of Temporary Services, an organization in Chicago that publishes a broad range of work, from serious authors to folk/street/outsider writers.  I began to think that I needed to be doing something similar here, although I am under no illusions that I am going to end up with a major operation like that.

So yesterday those of us who are going to offer classes/workshops at Backstreet had a meeting to begin shaping what our services were going to look like.  I pulled this waste book out and looked over what I had written eighteen months ago.  It was instructive.

Here are my Abortive Attempts:

It is my VISION to create a space where anyone in the community is comfortable enough to come and tell their story to the rest of the community in printed form.

It will be the MISSION of the Writing Project to produce printed material—books, booklets, pamphlets [et al.]—that reflect the history of members of the community, particularly those who have been marginalized by our society.

Now that I actually have to Do The Thing, I find that these scribbled notes are still valid.  I have no idea of who is going to be coming to work with me.  They may be nearly illiterate; they may already be polished writers.  They may write drivel; they may have a compelling story to tell.  They may be eager learners; they may be obnoxious know-it-alls.

In other words, it will be just like teaching writing in my classroom.

At the moment, pending further reality, I am thinking we may shoot for some kind of quarterly journal kind of thing, perhaps a 16-page booklet, that we can put out at the coffee shops, waiting rooms, etc., to create those ripples.  Having a deadline and a venue for publication [AUDIENCE] is also a great motivator for anyone.

Whatever my plans are, of course, they all have to wait until I actually have writers.  I’ll keep you posted.