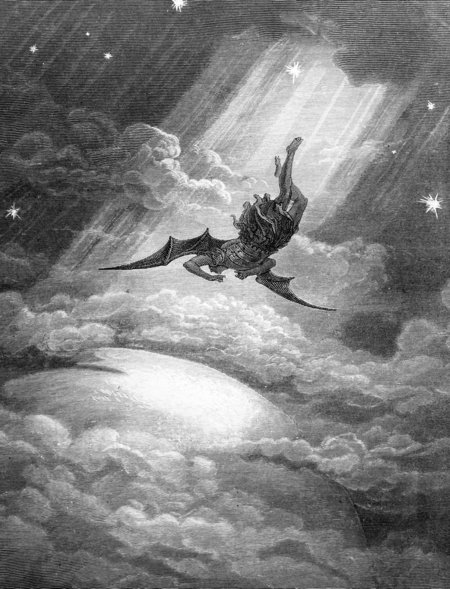 It seems that, last night at the Republicker National Convention, Ben Carson asked if America was willing to “elect someone as president who has as their role model someone who acknowledges Lucifer?”

What he meant, of course, was that Hillary Clinton admired Saul Alinsky, since she interviewed him and did her senior thesis on the man and his work.  And of course, as we all know, Alinsky is Satan himself.

Hold on, this gets tangled.1

Saul Alinsky was a renowned leftist community organizer back in the day.  His most famous book is 1971’s Rules for Radicals, which you can read in its entirety here.

Essentially, Rules is nothing more than a guidebook for rabble-rousing and in-your-face-itude.  In it, he says such horrific things as:

The democratic ideal springs from the ideas of liberty, equality, majority rule through free elections, protection of the rights of minorities, and freedom to subscribe to multiple loyalties in matters of religion, economics, and politics rather than to a total loyalty to the state. The spirit of democracy is the idea of importance and worth in the individual, and faith in the kind of world where the individual can achieve as much of his potential as possible.

We have permitted a suicidal situation to unfold wherein revolution and communism have become one. These pages are committed to splitting this political atom, separating this exclusive identification of communism with revolution. If it were possible for the Have-Nots of the world to recognize and accept the idea that revolution did not inevitably mean hate and war, cold or hot, from the United States, that alone would be a great revolution in world politics and the future of man. This is a major reason for my attempt to provide a revolutionary handbook not cast in a communist or capitalist mold, but as a manual for the Have-Nots of the world regardless of the color of their skins or their politics. My aim here is to suggest how to organize for power: how to get it and to use it. I will argue that the failure to use power for a more equitable distribution of the means of life for all people signals the end of the revolution and the start of the counterrevolution. [emphasis mine]

You can see why the Republickers of all stripes weep and gnash their teeth when they hear his name.

Most have never read his book, of course.  Most think it is more along the lines of this bogus email.  In other words, most Republickers think that Alinsky, in 1971, somehow specifically targeted everything they would hold dear in 2016.2   Very danger.  Much radical.

What the bogus email and Dr. Ben Carson have in common is the belief that clearly Alinsky was Satanic in his desire to DESTROY AMERICA, KENNETH, and their evidence is prima facie right there on the dedication page:3

Lest we forget at least an over-the-shoulder acknowledgment to the very first radical: from all our legends, mythology, and history (and who is to know where mythology leaves off and history begins — or which is which), the first radical known to man who rebelled against the establishment and did it so effectively that he at least won his own kingdom — Lucifer. —SAUL ALINSKY

Here’s my point.  Alinsky’s “dedication”3 to Lucifer is a witty, ironic reference to Milton’s grand anti-hero Satan, not some grand, evil, bloodsoaked LaVeyan credo.  As others have commented, one could hardly expect Dr. Ben Carson to get it.

And that, unfortunately, seems to be the predominant Republicker mindset on display in Cleveland.

1 This is Ben Carson’s thought processes we’re talking about here, after all.

3 Only not: it is not a dedication. The Lucifer quote —and two other quotes from Rabbi Hillel and Thomas Paine — are epigraphs, not dedications.  The book is dedicated to his editors and to his wife, on the previous page, the actual dedication page.

One thought on “Hillary & Lucifer, BFF…”