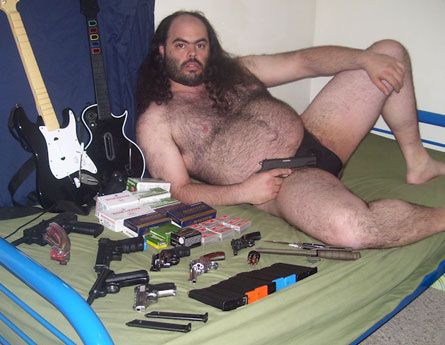 So, it seems that one of the favorite shibboleths of the gun fondlers is that these mass shootings often occur in a “gun free” zone, like a school or a church or some place where, I don’t know, reasonable people might reasonably assume they’re not going to get shot.1

“Sitting ducks” is how the gunhumping crowd describes the victims who apparently assumed incorrectly that they were safe.  If schools and churches and bars and other such places allowed guns, then those very sad deaths would not have occurred.

But I have to take exception to their argument.  These zones are not “gun free,” are they?  That’s just what we’d like them to be: free of guns.  We tell people, “Hey, no guns here!” and that’s what reasonable people who reasonably assume they’re not going to be shot there will do.  They don’t bring guns.

But nothing ever prevents a person with a gun from bringing one there.  They are not “gun free” zones at all, are they?

So saying that gun free zones are useless and should be done away with so that gun fondlers can protect us from the bad guy with the gun is kind of dumb.  There are no gun free zones in this country.

There are gun free zones in this country.  Perhaps we could look at those spaces and see how many people die in them from being shot when they had reasonably assumed they wouldn’t be.

We have the U.S. Congress, for starters.  No guns are allowed there.  Yes, security has guns, but those guys are heavily trained and heavily licensed, and not even they would be allowed to bring their gun into the Capitol if they showed up with Aunt Sally for a tour, would they?  So there’s an actual, honest-to-Cthulhu gun free zone.

Hey, here’s another gun free zone: The Republican National Convention  in Cleveland!  (You will have noticed that both zones are stocked to the gills with employees of the National Rifle Association, i.e., congresscritters and Republickers.)

I rallied to the cause a couple of months ago and signed the petition to allow guns in the Republicker convention.  After all, don’t they want it to be safe?  How can it be safe if it’s a gun free zone?

However, we were soon informed that while the NRA employees who are convening there might be sympathetic to our freedomz because freedom, the Secret Service made the rules and they’re the ones who have made it gun free.

Huh.  It’s like the Secret Service thinks that guns are a safety issue and would somehow complicate their job of making sure that Donald Drumpf can reasonably assume he’s not going to be shot there.  Weird.

And have you noticed that the NRA has not called to overturn the Secret Service’s rules about the Republicker convention?  Why isn’t Wayne LaPierre ranting about the restriction of his employees’ precious Second Amendment rights to pack heat on the floor of the Quicken Loans Arena?  Why is he allowing their rights to be crushed by the tyrannical overreach of the federal government?

Here’s the point: when it comes right down to it, the only way to keep people from being shot is to guaran-damn-tee that there are no guns.  That’s the bottom line, and all the whinging about Second Amendment rights cannot change that.

The only argument that the gunhumpers can make is that if they’re allowed to play Good Guy with a Gun, then the number of shooting deaths at your child’s school might only be eight instead of 26.  They do not — because they can not — promise zero deaths.

Oh, and the Second Amendment?  About that.

1 You will notice that the NRA has not made that an issue with the Dallas shootings.

One thought on “Gun free zones… if only…”