Very few alive have seen this: 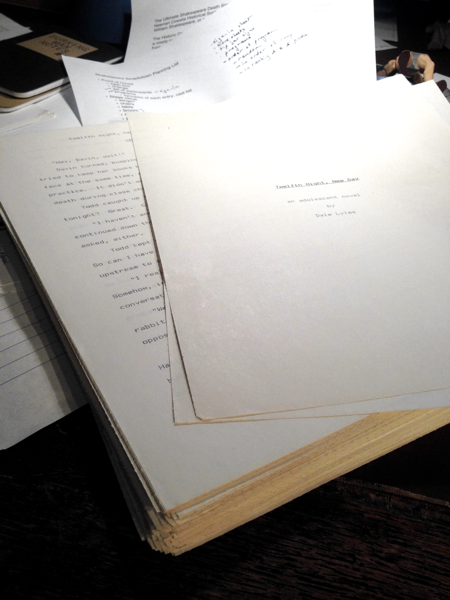 It is the dot matrix (!) printout of the young adult novel I wrote back in the 1980s as part of my master’s degree in media education.  It was the Adolescent Lit course, and the final project was either read and review 70 of the things or to write one yourself.  Hmph, I thought to myself, if S. E. Hinton can do it, I can do it.

So every Sunday, sitting in the choir at First Baptist, I outlined a chapter during the sermon then typed it up during the week.  Before I knew it, I had a novel.  Odd.

It’s called Twelfth Night, New Day, and it is a completely unremarkable piece of work.  It’s about a bunch of teenagers in a community theatre group—if you can imagine such a thing—and every character in it was based on the kids in my company at the time, all of whom are pushing 50 if not already past it at this point. (The plot was a poor thing but mine own.)

I had a good time writing it, and I even started a sequel, but if the truth be told I am not a fiction writer.  I don’t think I even have a copy of that one, which was called I Love You in Earnest.

Anyway, I needed space in the filing cabinet for this year’s tax documents, and when I discovered that I actually had two complete copies of this it was easy enough to decide to ditch one of them.

Yes, I’ve flipped through it.  No, it’s not worth dragging out and revising, I don’t think.  And no, I didn’t find a copy of the suppressed Chapter 13.