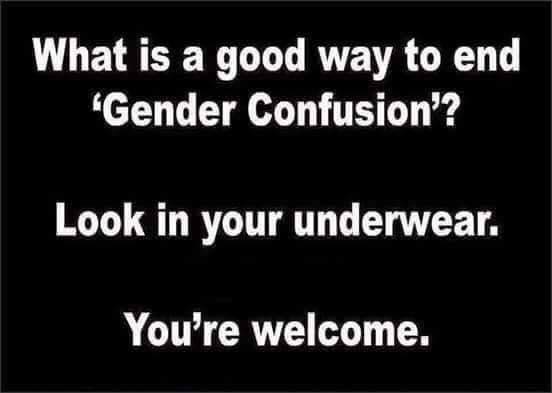 This is one of those memes that I call the rightwing “nuh?UH” response.[1]  Is your black-and-white world starting to look a little gray around the edges?  Simply asseverate whatever eternal truth that you think is unraveling.  Rinse.  Repeat.  Sneer smugly.

I presume this is in response to all the backlash to North Carolina and Mississippi’s idiotic “freedomz of religion” bills, the purpose of which is to protect the good Christianists from pooping next to someone who may or may not have the same fiddly bits as them.[2]

Look, I know that I have no clue about what it’s like to feel as if you’re in the wrong body.  I can look in my underwear and feel pretty affirmed, thank you very much.[3]  But I’m not so blinkered as to think that this is true of everyone when the evidence is piling up around us that it’s not.  In a conversation with my lovely first wife just last night, I pointed out that we seem to be awash in gender confusion much in the same way that we formerly seemed to be overrun with diagnoses of ADHD or reports of spousal abuse: society finally made it possible to even recognize the issues instead of hiding them.

So, yeah, suddenly it looks like crazy people have jumped on some kind of gender identity bandwagon, but the simple truth is that they were always there, they just suffered—and I mean suffered—in silence.

And further, I feel compelled to recognize their suffering as legitimate simply because of its disruptive nature.  In a recent interview, Caitlyn Jenner talked about breaking the world decathlon record at the 1976 Olympic Games, and said, “I remember waking up the next morning and looking in the mirror with not a stitch on and the gold medal around my neck, and it being a really scary moment. I was thinking, ‘Where do I go from here? What is my next distraction going to be?‘” She knew even then that she was in the wrong body.

Let us take a moment to remember what body she was looking at: 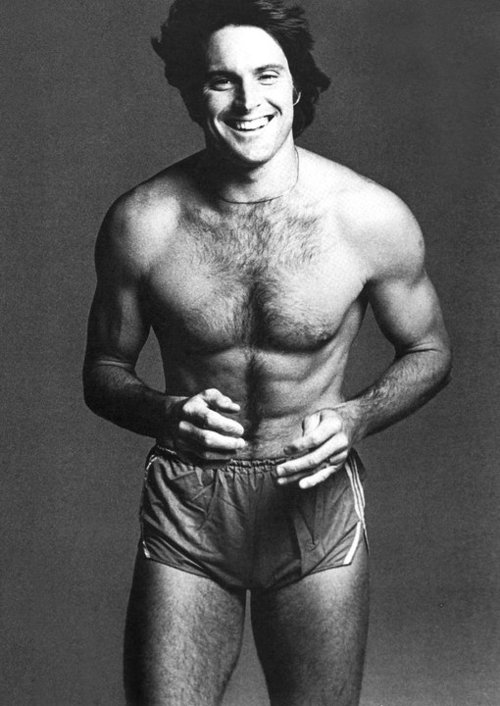 Yeah.  Tall, handsome, ripped, über-masculine.  Holy crap, I wish I looked even halfway like that.

Here’s the point: if the man in that photo couldn’t look in his underwear and answer the question of which gender he was; if he struggled with his gender for another 40 years; if he then chose to go public with his transition (problematic though it has been); then who the hell am I to discount his struggle?

And that’s just the one handsome man on the Wheaties box.  Rinse. Repeat.  But never sneer.

[1] Why yes, that is the closest approximation in the Latin alphabet to the International Phonetic Alphabet’s glottal stop character.

[2] Because I know that’s what I’m worried about when I poop in a public restroom.