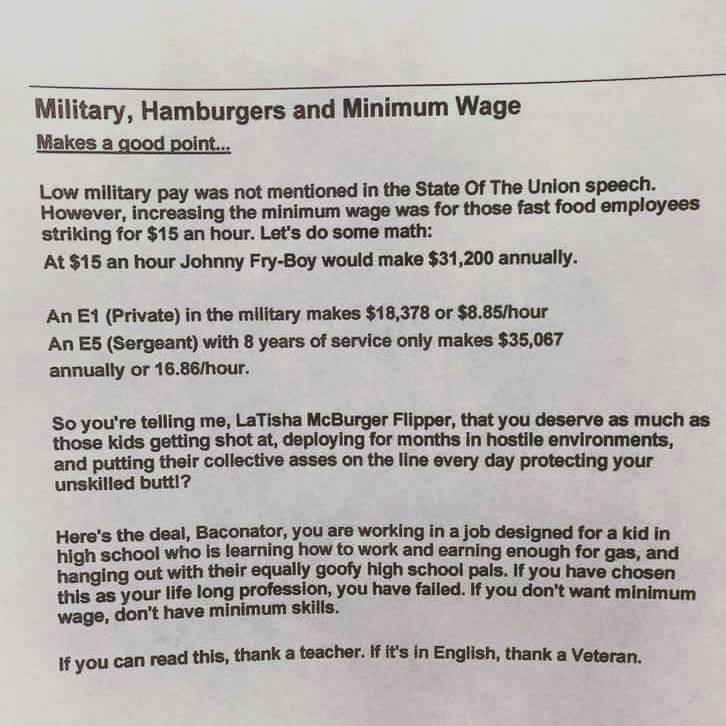 This encapsulates two of the rightwing positions that just drive me over the edge: worship of the military, and hatred for the poor.

As for the first, the idea that our current deployments in active war zones are in any way “protecting your unskilled butt” is ludicrous.  The last line in particular is one of those rightwinger classics.  I think the allusion is to the second World War, that we defeated Hitler and thus escaped the inevitable universal Third Reich that so captivates the authoritarian mind.

Because you remember how France and Poland and Holland were all speaking German by 1942, right?  Oh wait.[1]

I might add, if I were of a caustic nature,[2] that at no point in the last 60 years have any of us suffered the slightest threat of having to learn Vietnamese, Lebanese, Pashto, Arabic, Kurdish, or even Grenadan.  Just because the rightwing brain gets off on imaginary threats doesn’t mean they’re real.  (Spoiler alert: they’re not real.)

In the real world, our current “boots on the ground” adventures having nothing to do with any kind of existential threat to our nation.  They really don’t, and pretending they do is simply a ploy to elevate the good men and women who serve in our military to godlike heroes—a position I’m not sure many of them are comfortable with—for political purposes.[3]

My second bugbear, hatred of the poor, is there in spades.  Insulting names?  Check.  Disingenuous assumption that “Johnny Fry-Boy” works 40 hours a week?  Check.

But the argument that always just amazes me as an incredible example of the “is not/is too” frame of the rightwing mind is the “job designed for a kid in high school… who is earning enough for gas” thing.  They keep harping on this idea that fast food service jobs are merely some kind of a Happy Days lark, not a “real” job.

As they leave the drive-through at lunch, do they ever wonder who made their Value Meal if the place is staffed by high school students?  How is McDonald’s able to open before 4:00 every afternoon even?

Also, they harp on “burger flippers,” because those people are obviously scum, but of course the country is replete with other minimum wage jobs. (Also.)

Given the rightwing’s insistence on “personal responsibility,” it amazes me that they will look at someone working a job at McDonald’s in order to make a living and still sneer that for whatever reason the person doesn’t even deserve that because of “lack of skills.”  You’re poor and uneducated?  You should have thought of that before, loser.

I mean, and here’s the point, even assuming that Johnny Fry-Boy is a high school dropout and has no marketable skills other than working the line at Mickey-D’s, what do the rightwingers want him to do?

And here’s the biggest point that really leaves me slack-jawed: I see this story and the solution that pops into my head is to make sure our military is paid more too.

You would think that might have occurred to people who think our service men and women are godlike heroes.

[1] Sure, the Angles and the Saxons had to learn some French after 1066, but… You know what?  The whole mindset is stupid.

[3] During the run-up to the Iraq War, the authoritarians were waving the “fight Them over there so we don’t have to fight Them over here” flag, and the dirty freaking hippies were all like, “Dude, terrorism isn’t an army,” and guess who was right?