I think that on the whole it is better if we don’t delve too deeply into the fever swamps of deluded rightwing conspiracies, but today a “friend” on Facebook shared a meme from Exposing Satanic World Government.  That’s a Facebook group, folks.  (I would like to say that this “friend” is a recent addition, and I do—I really do—look for signs of this kind of thing before I click on the Accept button, but sometimes they just slip by you, you know?)

Here we go, straight into the deep end.

Let’s start with an easy one.

This is the kind of thing that one usually gets: the government is out to get us, etc., etc.

Nothing new or exciting really.  Just your run-of-the-mill, take-a-standard-government-program-and-turn-it-into-ONE-WORLD-GOVERNMENT-WAKE-UP-SHEEPLE stuff. As one does.

But I would like to draw your attention to that first comment. The poor guy meant “patsies,” I guess.  Easy typo, or perhaps an autocorrect, but I’m comfortable thinking that he just didn’t know the difference.

This is the level of discourse we’re dealing with here. Literacy is not this kind of person’s strong suit.

I should say at this point that the whole group is purely Christian in its approach.  I think it’s part and parcel of the whole authoritarianism thing that has recently caught the attention of the pundits trying to explain why Donald Drumpf is leading the Republican pack—and is closely followed by the even bigger horrorshow of Rafael Cruz.

(Of course, the hippies have been making fun of Republican “strong daddy” types since the days of W, but just like the Iraq War it sometimes takes time for the Very Serious People to catch up.)

Anyway, this is the kind of group that seeks strength through Christ, and by that I mean pure, naked power, not the strength of quiet faith and good deeds that the wiser among us picked up in Sunday School.  Since they seek power, they see it everywhere.  Since they want dominion over the earth, they a) create a self-image of being righteous warriors, and then—because what good is a flaming sword unless you have someone to smite it with—indeed, why does the flaming sword even exist unless there were, of course, b) an all-powerful Enemy?

Once you have this mental framework in place, then every waking moment of your life is spent looking under the bed and in the closet for that Enemy.  Every. Waking. Moment.

The comment on this one is representative of many of the comments on this page, a kind of pearl-clutching fantod that reassures the commenter and the readers that yes, they are servants of the Risen Lord and all manner of things will be well.  I’ve written about this before, this curious split-brain thing of thinking that one is simultaneously on the losing end of this corrupt world and yet the victor.  I still don’t get it.

I mean, these kinds of theories have abounded about the Beatles since the 60s, but it’s still hysterical to see all of them so tidily presented (and by a 24-year-old author!).

You may have noticed by now that there seems to be no dearth of websites dedicated to exposing the TRUTH to the world.  Once you start clicking, there is no end to them.

None of them explain why the Illuminati/Bilderberg/Freemasons/Satanists are taking their own sweet time in implementing the New World Order. You would think that our all-powerful overlords would have lost patience with teh sheeple and just taken over by now, but no, it’s clear they must get a kick out of teasing us with the threat of a nightmare future.

Again, I’ve written about this before, but it’s important to remember that this frisson of fear is a feature, not a bug, in these people’s worldview.  They wouldn’t see it that way, but their brains love that little tickle of terror they get when they imagine Satan just sitting there like a spider in a web.  They’re addicted to it. 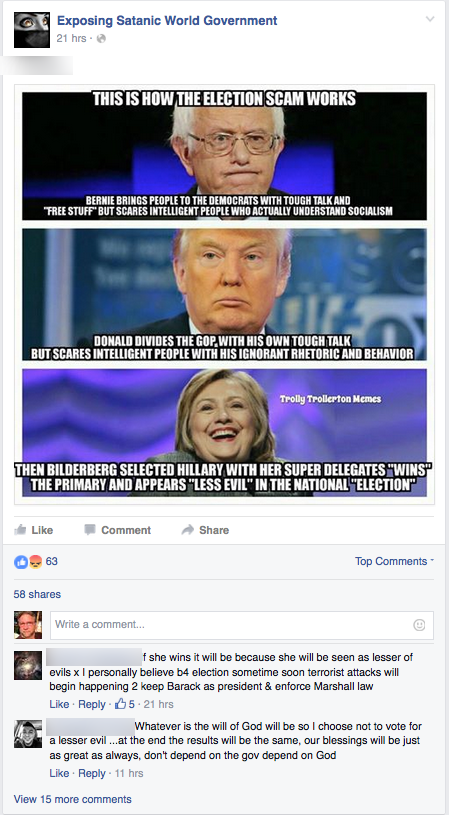 It all seems so clear now, doesn’t it?

I like the part about “intelligent people who actually understand socialism.”  This is something I have not noticed to be true in this election, especially from this kind of voter.

And the comments… The old “Marshall law” gambit: remember when the crazier liberals thought the same thing about W?  But this time… You know it’s true.

The energy expended by these people is incredible.  How do they keep it up when none of their fears are proven to be true and they just transfer the fear to something new? It exhausts me just observing it.

As for the “will of God” gambit, mercy, people, when are you ever going to think that perhaps God is working his spirit out through Barack Obama or Bernie Sanders or even, Cthulhu help us, Clinton?1

Spoiler alert: never.  It will never occur to them that God might be a liberal.  Or that she might not even care.

And if “our blessings will be just the same,” then why all this energy directed at identifying, exposing, and defeating the Satanic World Government?  I’m not sure what the point is, if nothing you do matters because God has his eye on the sparrow.

Last one, I promise:

There is a 15-minute video which I have not watched—nor am I going to—positing that Donald J. Drumpf is a high-ranking priest in the Satanic World Order.

This is not an isolated viewpoint.  Click through and a) read the comments; and b) check out all the videos recommended over on the side.

Once you’ve committed to this mindset, the whole of the planet must be viewed through that lens, and everything must be made to fit the madness.  Donald Drumpf is just a egotistical bully?  Nonsense: he’s part of the conspiracy to elect She-Who-Must-Not-Be-Named.  The Beatles were a talented group of men who hooked into the zeitgeist of a world waking up to possibilities of not despising those different from you?  Crazy talk: they were puppets of a conspiracy so vast that it is capable of destroying all that we hold dear.2

1 Just to be clear, I am not a Clinton basher.  It’s just that she’s the current repository for all the irrational fear and hatred.  What do people think is going to happen if she’s elected? What on earth could it be that would make it better to vote for Trump or Cruz??

2 Because, really, who wouldn’t want to rule over a world that you’ve wrecked beyond repair?

One thought on “Holy crap.”