Makes me sick knowing that this silhouette will soon be gone & the view of this “yet-to-be-named” Square will forever be missing Jackson’s statue. Boggles my mind that the Square was built in 1721 & Jackson’s statue erected in 1856, yet in 2015 it’s going to be removed by people with an agenda following a prescribed agenda. 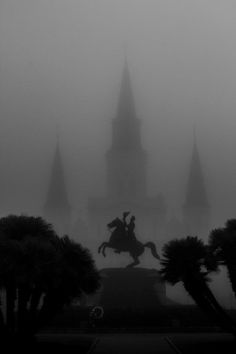 This was the comment under a lovely photo of Jackson Square in New Orleans, in the fog with the equestrian statue of Andrew Jackson silhouetted against the cathedral.  It was posted by a Facebook associate—I refuse to call them “friends” anymore—and I had to come blog about it here rather than be rude over there.

It’s in response to the city of New Orleans deciding to divorce itself from its Confederate past.  (You can read about it here if you like.) This kind of thing is always problematic, because no one likes the idea of trying to erase the past. It smacks of Stalinism at its propagandistic worst.

However, I don’t think that’s what New Orleans is trying to do.  I think they are simply voting to disengage from the part of their past which celebrated the ill-conceived (and even more ill-executed) Confederate States of America.  There is no way we can ever erase our embarrassing rebellion, but I don’t think anyone would ever deny that since our defeat in 1865 our region has clung to the Glorious Cause as if it were an unmitigated good.1

So good for the city council of NOLA in trying to put all that behind them.  Better to put it in the closet than sweep it under the rug, I think.

But in regard to the comment above, eyebrows must be raised and lips pursed.  I am always astonished at how un-self-aware persons of this ilk are. His mind is boggled that the Square existed for 135 years before the city honored the hero of the Battle of New Orleans, which occurred at the end of the War of 1812,2 and then laments that the city has decided to make another change.  Because that’s an “agenda.”  The “agenda” that renamed Tivoli Circle to Lee Circle3… well, that’s not an “agenda.”

And there we have it: the mentality that the privileged history of the commenter is the default reality and everything that deviates from that is actually deviant.  It’s the source of much butthurt in our rightwing brethren these days.

Because here’s the clincher: this is pure butthurt.4 If you go read the article in the footnote below, you’ll see that the monuments that are being removed do not include Andrew Jackson’s statue in Jackson Square because Andrew Jackson, whatever his other heinous faults, was not a Confederate general.5

How does a brain like that remember not to leave the house without pants?  Jebus.

1 Yes, I am aware that many among us still consider it an unmitigated good.  They are as wrong as their ancestors.

2 Technically, it occurred after the end of the War of 1812, but news about peace treaties traveled slow in those days.

3 The white New Orleanians who put up the Lee statue in 1884 and renamed Tivoli Circle for him didn’t hide their motives. “We cannot ignore the fact that the secession has been stigmatized as treason and that the purest and bravest men in the South have been denounced as guilty of shameful crime,” The Daily Picayune wrote. “By every appliance of literature and art, we must show to all coming ages that with us, at least, there dwells no sense of guilt.” [The Editorial Board, NOLA.com | The Times-Picayune. (2015, December 18). With vote to remove Confederate monuments, City Council embraces New Orleans’ future: Editorial. Retrieved December 18, 2015, from http://www.nola.com/politics/index.ssf/2015/12/confederate_monuments_new_orle_7.html ]

5 That would have been difficult for him, since he died in 1845.