OK, so I’ve not been very productive.  But I have accomplished some little bits.

First, you must know that I’ve been working on re-orchestrating A Christmas Carol for next December’s re-premiere.  I haven’t shared any of that because it’s not very interesting, but here’s a taste:

This bit of underscoring takes us from the chimes of a neighboring church to the Ghost of Christmas Present’s teasing appearance, to their transportation to Scrooge’s past: the countryside, Martin and Oliver having a snowball fight, and then fading into the schoolroom.

The process of preparing sound files for December is not at all the same as simply re-orchestrating the show from an 11-piece ensemble to a full orchestra.  Because I’m not actually working on documents for live musicians, there are lots of shortcuts and omissions.  For example, if I transpose a harp sequence up a octave, I don’t bother moving it from the bass clef up to the treble clef because who cares?  No harpist is going to have to decipher what I’ve written, and the computer doesn’t care—it will play the notes exactly where I’ve put them whether they look correct or not.

Repeats are another area: many of the pieces have vamps (bits that loop until the scene moves on) or repeated verses/choruses.  For live musicians, repeats save paper and are easier to read.  But the printed repeat signs are irrelevant to a computer program that I’m going to instruct to “loop this waveform until I tell you not to,” and so I’m leaving those out. In the above sample, there is a vamp on the flute part that you won’t hear because that will be taken care of in QLab, the multimedia sequencer I’m still exploring.

I’m in the middle of pondering whether it is going to be better to try to “slice” the repeat (with varying degrees of smoothness or accuracy) in QLab or to export each section of a piece separately so that the repeated section is clear and easy to click on.  This may become critical in rehearsal, of “A Reason for Laughter,” for example, as we try to get Mr. and Mrs. Fezziwig in and out of their verses, or in “Country Dance” when we’re trying to learn new sections of the dance.

I also have been taking repeat signs out of pieces like “Country Dance,” where it’s just easier to string all the jumpbacks (from A—>B—>A—>C—>A) out into one long piece rather than deal with all my quirky repeat signs.  In fact, I’ve stopped working on the music to blog here because the challenge of untangling “A Reason for Laughter” makes my eyes cross.

Anyway, as far as slicing vs. exporting multiple files for each pieces goes, I have lots of time between now and November, so I can play with all my options.  (Who am I kidding?  I’ll take the complicated way because it will make life much easier in rehearsal.)

I have gained an assistant: 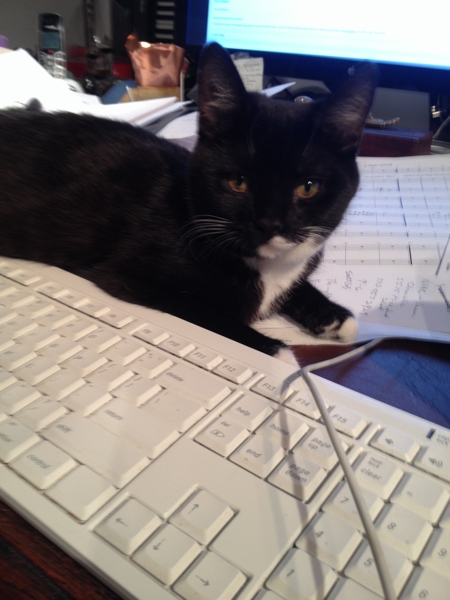 She is currently trying to keep me from typing—WHAT IS THE DEAL EVEN I SHOULD BE PETTING HER ANYWAY—and did you know that pencils, pens, and erasers make great rolly toys, especially if you knock them to the floor?

She’s been with us for a couple of weeks now but has so far refused to divulge her name, and she is the only cat I have ever met that, when you pick her up, goes limp in your arms and settles in for a cuddle.  She’ll shift, turn over even to get more comfortable, but ask to be put down?  Nope.

This is not the cat I was looking for—I prefer tabbies—but she is such a sweet-tempered beast that we were afraid to tempt fate by giving her away.  I’m trying to get used to cat hair everywhere again.  The turbo-purr helps.

Rehearsals continue for Into the Woods.  You will have to believe me when I say it is not bragging to claim that my performance will be a tour de force—it would be for anyone handling the roles of Narrator, Mysterious Man, and the Wolf.  Generally, the Narrator/Mysterious Man are combined roles, but the Wolf is played by Cinderella’s Prince.  My playing all three requires some very quick changes indeed, and so the audience can not help but be dazzled by my facility, speed, and grace.  There is one moment where I—as the Narrator—facilitate Milky White’s escape from the Baker’s Wife, only reappear seconds later as the Mysterious Man; I expect it to provoke laughter.

I am quite enjoying the chance to sing “Hello, Little Girl,” however.  It’s delicious, nasty fun.

Lichtenbergianism: procrastination as a creative strategy is going well, if by “well” you mean “successfully avoid writing abortive attempts for Seven Dreams of Falling while not accomplishing an awful lot.”  I sit in my writing chair—that’s an official thing—and start free-associating on one of the 9 Precepts, and before I know it I’ll have two pages in a minuscule field notebook almost filled.  It’s exhausting.

So far, I don’t have any brilliant new insights to share from my writing; I’m still in the “dumping” phase, wherein all those things I’ve said and thought about the creative process over the years are finding their way out of the recesses of my brain onto the page.  I’ve also begun collecting relevant bibliographic support, so that’s progress of a sort.

Finally, a look at the labyrinth:

A panoramic shot from the west side looking back towards the entrance—not our usual vantage point.  The winter rye grass makes for a lovely oasis of green, although I’m sure I’d be a better hippie if I learned to appreciate Nature’s own withered brownness.

I am eagerly awaiting warmer weather!