First of all, apologies for not really blogging.  Events have all conspired against me blah blah blah.  I hope the Bad Etchings have entertained you in the meantime.

Recently on Facebook I did one of those challenges where I listed ten books that have impacted me.  Today, as I was working on sashes for the four Old Men skirts, I was reminded of one that truly changed my life, one that didn’t occur to me while making the list because its lessons are so deeply embedded in me that it never surfaces for trivial things like the Facebook list.

That book is Cheaper by the Dozen, by siblings Frank B. Gilbreth and Ernestine Gilbreth Carey.  The movie is irrelevant, and in fact I don’t much remember the charming shenanigans of the Gilbreth family in the book.  What I do remember is what their parents did for a living: both mother and father were famous efficiency experts, and what they discovered through their motion studies in factories changed my life forever.

Put in its simplest form, it’s this: if you have a multistep task that you have to do repeatedly—as most factories have to do to assemble their products—then you perform each subtask of the final task all at the same time before moving to the next subtask.

So with my six sashes, I cut all the monks cloth panels first, then serged all six, then cut all six colored linings, then marked them, etc. 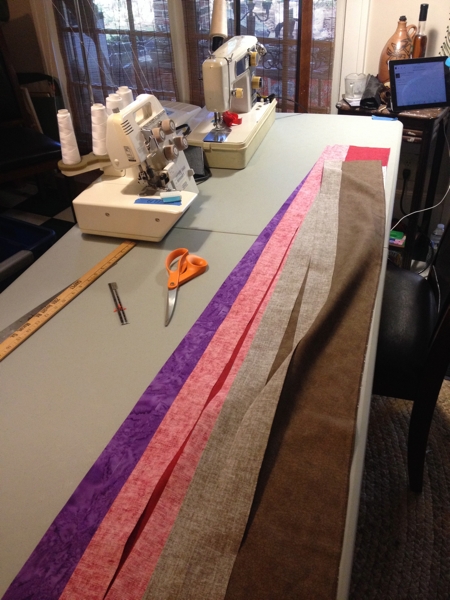 At the turn of the last century, as America geared up to become the industrial powerhouse it became, the Gilbreths played a key role.  We already knew about standardizing parts, but we were still in craftsman mode.  Even in the new automobile industry, we were apt to have crews who assembled the whole car from start to finish.

The Gilbreths changed that.  They showed to the way to Ford’s assembly line; as the great man says in Ragtime,

Even people who ain’t too clever
Can learn to tighten
A nut forever,
Attach one pedal
Or pull one lever
(source: http://www.lyricsondemand.com/)

And so on we moved.

The main way it makes the individual craftsman more efficient is that you’re not always shifting mental gears for the next subtask.  Instead, you can settle into the rhythm of pinning the monks cloth to the lining, for example, and then once that’s done, set up the new rhythm of basting the two pieces together.  And so on I moved.

The other major strategy I got from the Gilbreths—and which I do remember played some part in the hilarity of the book—is arranging your parts and pieces so that they are 1) within easy reach; and 2) in the same order that you’re going to need them.  I can’t tell you how many times I have caught myself in some project or other reaching across myself or the product to pick up something I needed.  I almost always stop myself and rearrange my workspace.  I hope that the Gilbreths would approve.

Last Saturday, members of the 3 Old Men ritual troupe met to assemble the labyrinth for the first time and to run through the ritual.  I am drawing a discreet curtain over our experience—sometimes you, dear reader, need to encounter the sacred directly and not through my reportage—but I would like to show you the labyrinth.

You will recall that I had designed an octagonal labyrinth with four entrances, to be made of 144 tent stakes and about 1000 feet of rope.  You may also recall that I designed the method by which we would lay this out, by using a triangle of rope like the Egyptians.

And you know what?  It worked. 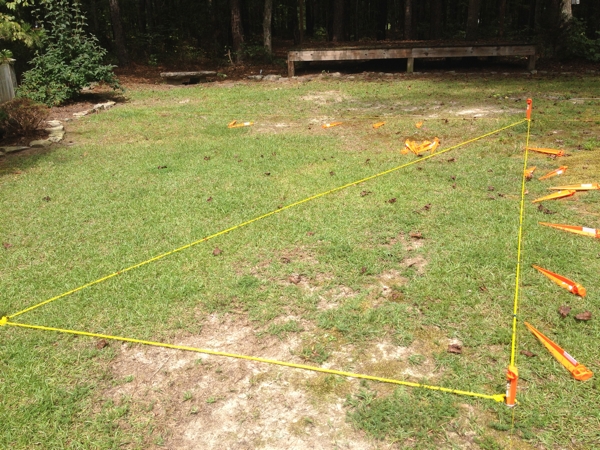 Staked to the center, the ropes form a right triangle when pulled tight, creating a 22.5° arc at the center.  The two long ropes are marked, indicating where the stakes are to be driven (with a few variances).

Here’s that in action: 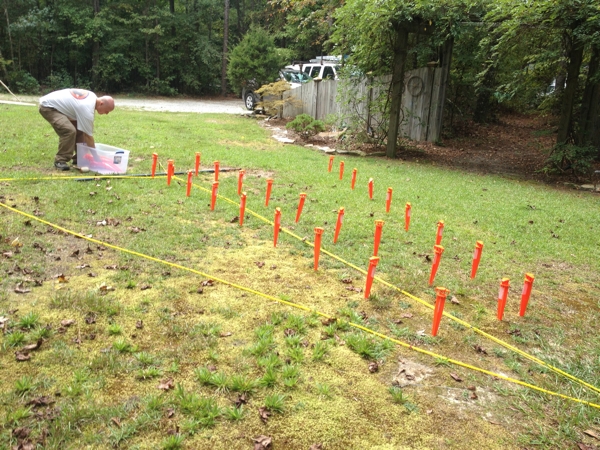 Give or take a couple of boneheaded mistakes—missing an outer stake, not taking the long ropes all the way to their last stake, that kind of thing—it worked beautifully. 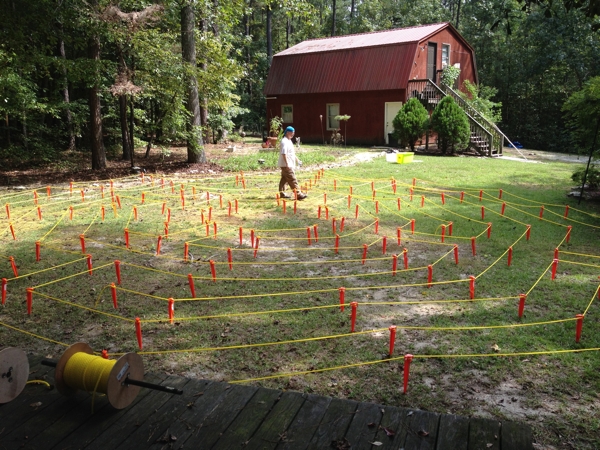 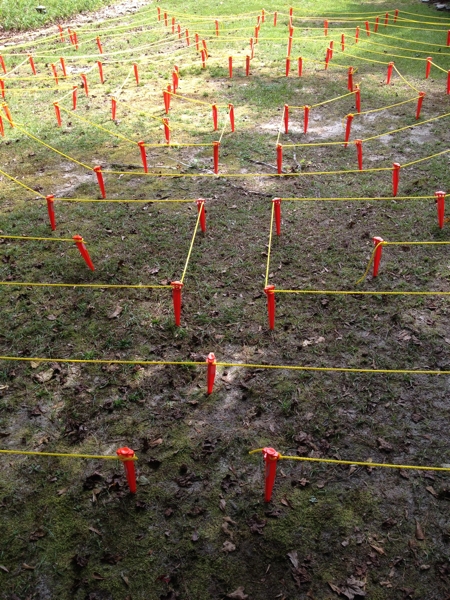 It’s going to be a wonderful thing we’re doing at Alchemy and, next year, at Burning Man.  I’ll talk more later about the actual experience of walking this particular labyrinth.