I’ve been composing/orchestrating with some excellent results, but the intertubes have been destroyed, no doubt by aliens, so we all have to wait until tomorrow to hear the duct-taped glories of “Rise and fall.”

In the meantime, I will share today’s other small victory via the miracle of my iPad and the 3G network.

I’m sure everyone remembers my musings on the 3 Old Men ritual troupe, originally created for a trip to Burning Man next month and now re-aimed at the Alchemy Burn in north Georgia in October. One of the items I needed to figure out was body paint. (At one point in the ritual, we will be adorning our aging physiques.)

The real stuff is expensive, so I went looking for some home made recipes on the web. I found a really easy one, just cold cream, cornstarch and water. When I finally got around to testing it, though, it was not in the least opaque.

I searched again, and found a similar one that added flour. Good, I thought, that’s opaque enough. But the admixture was still just cold cream.

So what would be opaque enough? I thought about using poster paint, but who knows what kind of toxicity is involved there.

And then it came to me: kaolin, Georgia’s own “white dirt.” I asked Facebook where it could be bought, and I got all kinds of responses for local establishments that carried it. The winner was Food Outlet, where you can find it in the produce section right next to the okra.

Next step was to drag out the cold cream and shave off some kaolin into the mixture.

Nope, still not really what I wanted. (What do I want? Something along the lines of Butoh dancers.)

Today, casting about for something to do other than get out in the heat and humidity, I remembered thinking that I should try to dissolve the kaolin in water and then use that precipitate to mix with cold cream.

Was kaolin even water soluble? It was. And as it began to dissolve a little bit, I picked up the piece of wet kaolin and smeared it on my hand. 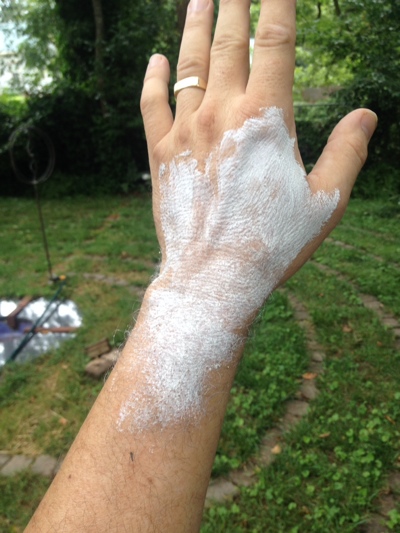 So that’s it: carry chunks of the extremely cheap mineral with us, have a ceremonial bowl of water, dunk a chunk, and smear away.  It doesn’t seem to rub off, and mere water washes it away.  More research is required to see if cold cream might in fact give us protection against rain, although frankly I’m not sure I’m going to be standing in a long, trailing skirt in the rain.