I’ve been successfully avoiding any actual composition since 2011, when I finished the Cello Sonata, and re-orchestrating Christmas Carol has proven to be an even better task avoidance strategy since it’s work that has to be done but doesn’t involve actually composing.  It’s a good life.

Leave it to a clown to mess it all up.

Mike Funt emailed me last week and demanded a piano piece to which he could make up some kind of clown crap because—are you ready for this?—he was inspired by this drawing at the Los Angeles Museum of Modern Art: 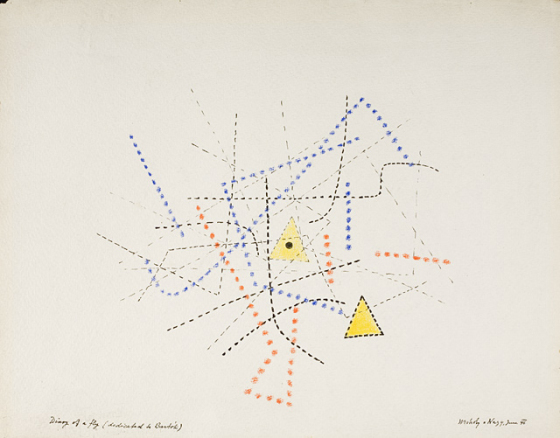 For reference, he sent me a couple of YouTube videos of George Gershwin playing some of his earlier ragtime pieces.  Make it like that, he said.  But make it yours.  I want to use your music, he said, somehow forgetting that my music is pretty much unGershwinesque.

So I thought to myself, well, it could be OK.  It’s not as if it’s a handshake commission to compose a postmodern opera of the Icarus myth, is it, because that would be terrifying, what with having to submit my fraudulent work to real audiences and critics and all.

Composing is hard, y’all, and I don’t like it.  I’ve worked all weekend on this thing and it’s still only 45 seconds long.  I keep abandoning stupid crap, and it keeps trying to wander off into Five Easier Pieces territory rather than stick to its ragtime roots.  Part of the problem is trying to think—as I hammer out material—how Mike might use the music and therefore writing stuff that is useful.  But who knows what clowns find useful?  Other than seltzer bottles and red noses, I mean.

I’m already going to miss my self-imposed deadline of finishing it today—trust me, it’s not going to be finished today—and I still have “People Like Us” to re-orchestrate.  Plus the NYTimes crossword puzzle.  And I’m sure I should be out in the labyrinth in the downpour fixing something.  And there’s physical therapy at 1:00, and then I have a meeting at the Boys & Girls Club around the corner about becoming a volunteer there, and there’s no way it’s going to be finished today unless I stop blogging and hammer out another minute of music.  Perhaps I need to write the ending next and then just glue pieces together to get there.

Anyway, I’m about to take a deep breath and post what I’ve got.  I used to do this all the time with music, just revealing my foibles to the world as I hack and slash my way through the thick chaos of the universe, so I’m just going to do it now and let everyone marvel at how very unGershwinesque it is.

It stops abruptly.  Of course.

Ha, take that, you clown.  Here’s the finale, and I think—in order to satisfy my twisted desires—I’m going to make it longer.