It’s that time of year again for me to explain myself: the Lichtenbergians had our Annual Meeting last Saturday night, and as usual we had to declare our creative goals for the coming year.

I was astonished to find that I had actually met some of my 2013 goals, mostly because I could not remember what they were.  (I was not astonished to find that I hadn’t even blogged about them last  year.)  Honestly, all I could remember was that I had once again listed the Five Easier Pieces and a song for John Tibbetts as goals, and that I had done neither.  Also honestly, “continuing to work on the Book of the Labyrinth” was not that arduous a goal, but after the year I’ve had, I’ll take what I can get.

But recently I think I may have gotten traction in my creative impulses, and so I’ve gotten bolder for my 2014 goals.  Here they are:

A set of piano pieces that serve as companion to and apology for Six Preludes (no fugues).  I actually struck a blow at these over the year, but I think now I’m ready to proceed.

A song for John Tibbetts

One of the most common form of spam comments on blogs these days is the kind that uses a netbot to assemble random passages of text from the internet at large and then paste them into the body of emails in blocks of about 50 words, accompanied by links to dangerous places.  Mostly these are about one “paragraph” long, but recently the Lichtenbergian site received one that is magnificent in its length and in its poetry.  You can see it here.

I want to write a work for chorus, soli, and orchestra based on this text.  In 2014, my plan is immerse myself in the possibilities of the text and to quite frankly “steal” bits from pieces of music that appeal to me and to write fragments of music based on those bits.  It’s kind of a training year in that regard.  In 2015, perhaps, I’ll start to work on the piece directly.  SUN TRUE FIRE. 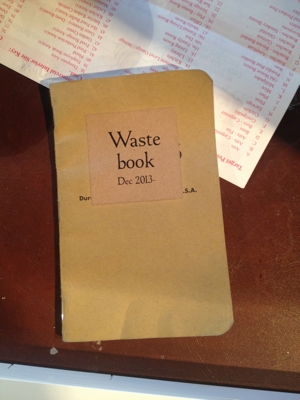 To that end, and to all these ends, I am going to embark on a year-long waste book project.

One of the things Georg Christoph Lichtenberg is famous for is his aphorisms.  (I would direct you to the Lichtenbergian website to see some of them, but the Quote Rotator plug-in broke on the last WordPress update.  Try here.)  His practice was to jot down in a notebook all the random thoughts that occurred to him, and then to transfer them to better notebooks later.

He got the practice from merchants, who would scribble the day’s transactions down in such a “waste book” during the hurly-burly of business, then transfer them cleanly to the account books in the evening.

This is not an uncommon practice, of course.  Any writer worth his/her salt does this anyway; many do it electronically these days.  But I’ve found that I can get more ideas written down and remembered if I use pen and paper.

The impetus was an email from a fun company in Chicago that linked to one of their brands, Field Notes.  Always a sucker for office supplies, I actually subscribed to their “Colors” year-long subscription, not because I thought I would be getting the coolest notebooks ever—sorry, Field Notes, that’s still Moleskine—but because it would force me to do it: to write down every thought that comes to me about the various projects I’m working on, or thinking about working on, and then expanding on those thoughts in project-specific notebooks.

I even bought the cool little pine box to store them in.  It comes with dividers and a calendar.

I will have to add that the Field Notes notebooks are very nice indeed, and the guys at the company are pretty generous: in addition to the things I actually ordered, they threw in extra notebooks, pencils, etc.  I’m starting the year with fifteen notebooks altogether, three of which I have already begun.

I turn 60 in May, and I’m determined that I am going to go to Burning Man Festival this year.  My friends Craig and David, also celebrating milestones this year, are planning to be part of the team.  (There may be others in the months to come.)

Part of the gestalt of Burning Man is that you have to be a participant, not an observer, and an image of what I and the team could do to contribute to the process came to me last week.  I’m using the notebook to flesh those ideas out, document the process as it were.  That’s all I’m going to say about that for the time being.

In a meeting with Newnan Theatre Company’s artistic director Tony Daniel recently, I offered NTC a shot at William Blake’s Inn and also a revival of my Christmas Carol.  He seemed interested in CC so I said I’d try to reconstruct the entire show, since all those MIDI files from decades ago have vanished.

You may imagine my astonishment when I was told at the Lichtenbergian meeting that indeed NTC was announcing my CC for next December.  Well.  It seems one of my goals for 2014 is to completely reconstruct the score for the show from my original hand-written score from 1981, since there’s nothing else to go on.

Over the years we did the show, it grew from a piano and cello kind of thing to a full-scale MIDI orchestral accompaniment.  The Overture, in fact, was never written down but developed completely in the sequencing software I was using at the time.  I’ve decided to go back to live accompaniment: piano, synth, cello, clarinet/flute, and glockenspiel/bells.  Essentially I’m having to approach the thing as a new work, and we all know how well I respond to that.

Still, it’s a public performance of my music and I mustn’t sneeze at that.  I’m really looking forward to it, because in reviewing the piece over the last month I was super-pleased to find that it still held up, and when I mentioned it on Facebook there was an immediate flurry of reminiscensces and quotes.  Heartwarming and encouraging, it was.

So there are my goals for this coming year. 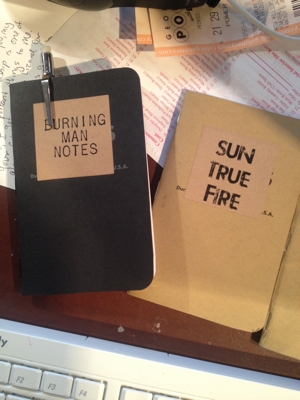