Wednesday night I was out meditating by the fire in the labyrinth, and as I got things set up I noticed that the metal fire pit had rusted out pretty badly.  It was time to discard it and actually build the permanent one.

Those who  have been to the labyrinth in the last four or five months will have seen that I’d blocked out such a thing, literally, with blocks, and the metal fire pit was perched on top of those blocks.  So as the evening wore on and I was gazing into the fire, I came up with a plan.

I had of course done a little research on the web to see if there were an established method for this kind of thing, and I found several how-to’s.  But most of them involved digging down two or three rounds of stones and pouring a concrete base, then building the thing three or four rounds high above the ground.  They seemed excessive for what I needed.  Indeed, as I set to work Thursday night, it dawned on me that most of those instructions were for people who wanted a place for a bonfire for large groups of people to mingle around.  I needed something for a small group of people to sit around.

Anyway, as I gazed into the fire, I came up with a lovely little design that I thought might work.  Feel free to steal this.

Thursday night, in a burst of energy and inspiration, I got out and dug the first version of the hole: 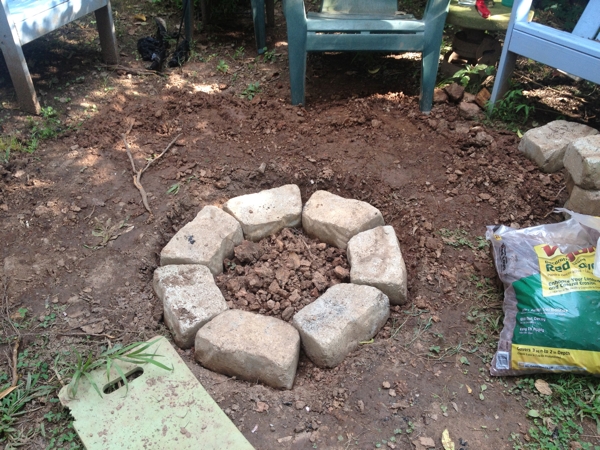 That’s the basic idea.  Do you know how hard it is to dig a hole that is six inches deep and thirty inches wide in clay packed with construction debris?  It took a while.

Having dug the hole, I lined the whole thing with red lava rocks and raked it level.  (Take that, concrete-base-pourers!) The lower round of stones rests on that. 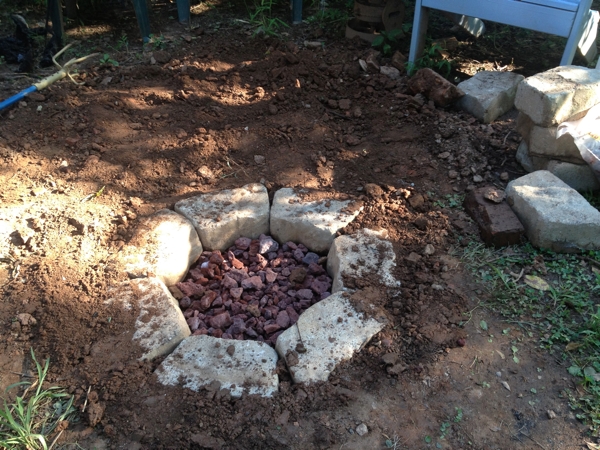 From there, I laid a complete round of a dozen stones above that.  Here’s where I had problems.  Knowing I did not have enough stones* to make two complete rounds, I went to Home Depot to buy ten more.  Alas, of course, they did not have these stones any more, so I bought ten of a different variety.  They did not match, nor were they the same size.  More of that in a minute. 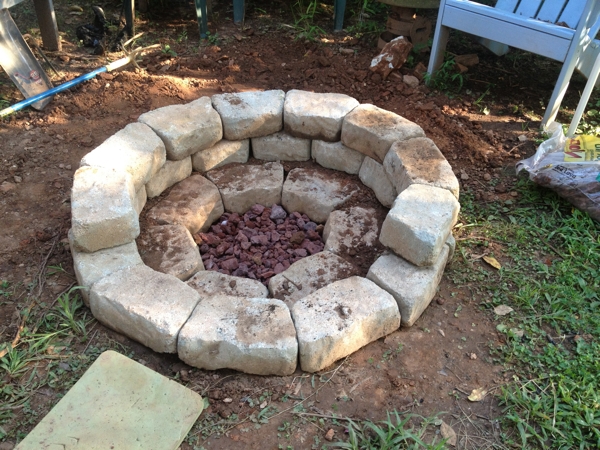 I added more lava rock to the center to make it level, and I was ready to test it out.

Here it is in situ: 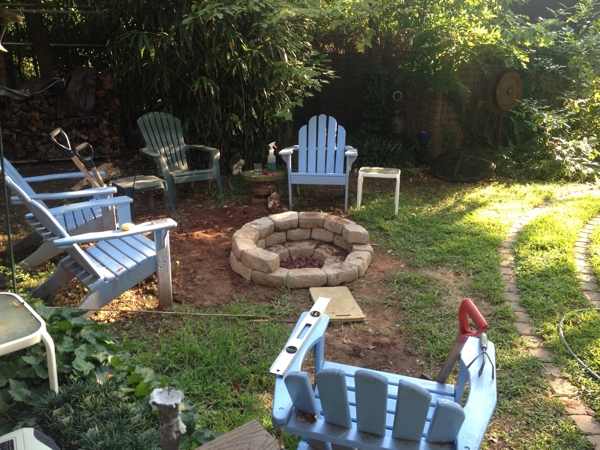 And from across the labyrinth: 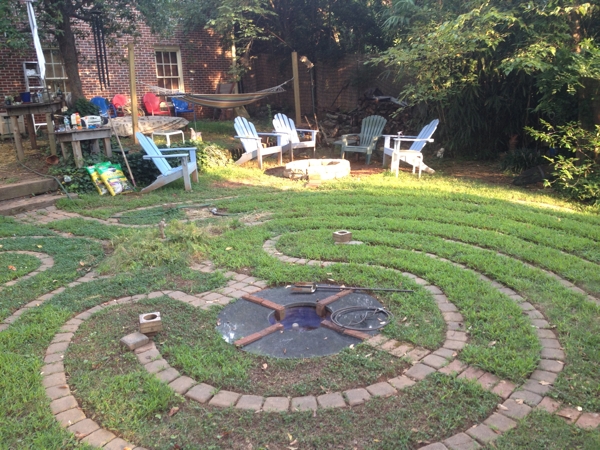 For fire testing purposes, I went ahead and placed some of the alien stones in the upper round. 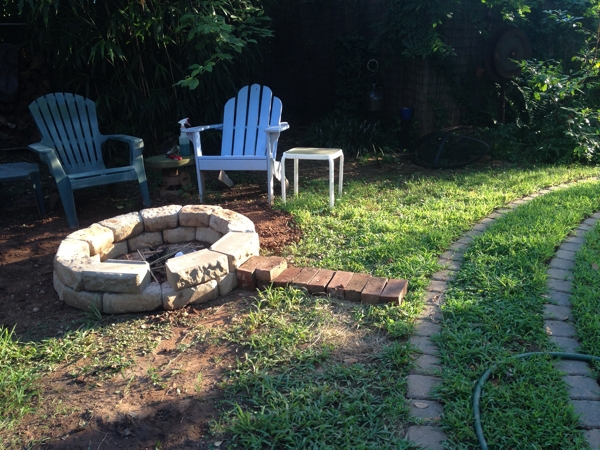 Notice the gap.  Feh.  I’m also running a line of bricks from the pit to the labyrinth.  Very crop-circle-ish, made even moreso by the fact that the pit is connected in a straight line through the center of the labyrinth to the lingam stone on the other side.  ::cue Twilight Zone theme::

The good news is that it functions brilliantly, even better than the store-bought ‘un.  The lava rocks, I think, provide airflow that creates a lovely fire throughout. 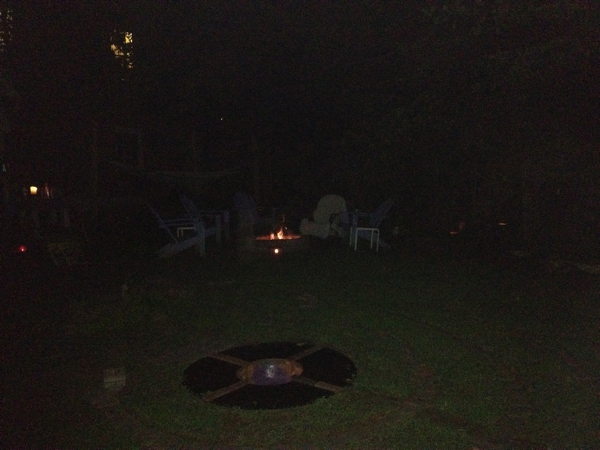 So now to Important Questions.  In watching the flames last night and wondering how the heck I was going to find four more of the old-style stones, I had a scathingly brilliant idea.  I had another, more “doh”-related, as I began to write this post.  I will share both, and we will discuss the two in comments.

Idea One: I can put the alien stones in the first row, with the gap facing the line of bricks.  The theory is that the fire would cast a stream of light out towards the center of the labyrinth.  (And by extension, to the lingam.  Of course.)

Pending discussion, here’s what I’m going to do.  This afternoon, I will reconfigure the stones to test the gap/stream of light hypothesis.  If it works well enough to be cool, we’ll go with that.  If not, then I reconfigure again and reclaim the necessary stones from the bottom.

UPDATE: After some frustrated cursing at the alien stones, which did not work in any position, I took my quest to the road, specifically to Lowe’s.  As it turns out, I must have bought the original batch from there, because there they were.  I bought more than enough to finish the job, and lo!: 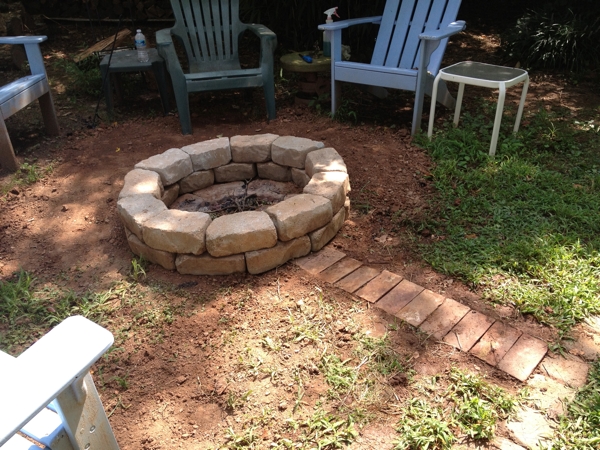 The next phase: planting dwarf mondo grass around it.  When that dies, we’ll start laying down stones.

2 thoughts on “A fire pit worthy of the labyrinth”