Look at this, I haven’t blogged in a month! I was going to call this post A Shame and a Disgrace, but that’s the title for another post I need to write.

I don’t really have an excuse, except that my brain is too full to let any of it out. And part of it, of course, is stuff that I don’t need to be letting out on a blog. Blogs are not diaries, people, not if you’re smart. But I’ve sworn an oath to do better.

So let’s start with the tree crashing into the labyrinth.

Previously, you will recall, the dead tree gave up the ghost after a storm, and after letting it lie in state for a day or two, I cut it up and put it over on the woodpile. Then not even two weeks later I had a Sunday free and clear. It was so free and clear that after I took care of a couple of chores, I was going to go sit in the labyrinth and read all day. Bold, radical, that’s just the way I roll.

I came downstairs from my study to let my lovely first wife know that I was heading out to the labyrinth for the day. Our den faces the back yard, and as the words were leaving my lips, a noise came from before and I saw a complete third of the neighbor’s pecan tree crash into the labyrinth.

Of course we tumbled straight downstairs and out to see what had happened: 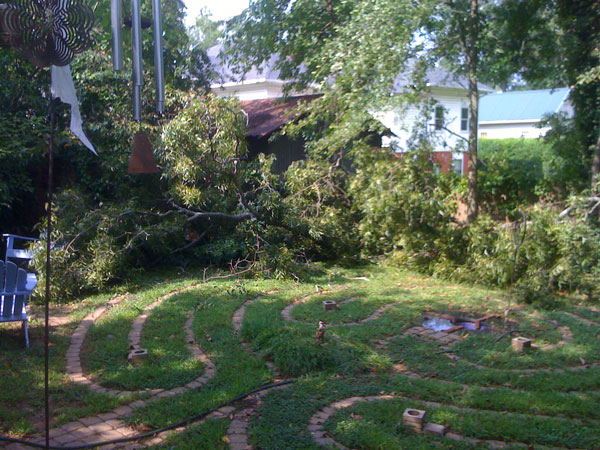 Huge. Well, there went my free and clear Sunday. I went to change into my work kilt and get started clearing it away.

Step one, for those of you have have never had to do this kind of thing, is to strip away all the branches and leave the trunks. That’s not hard at all, of course, and becomes an analytical kind of puzzle, especially with an enormous tangle like this one. 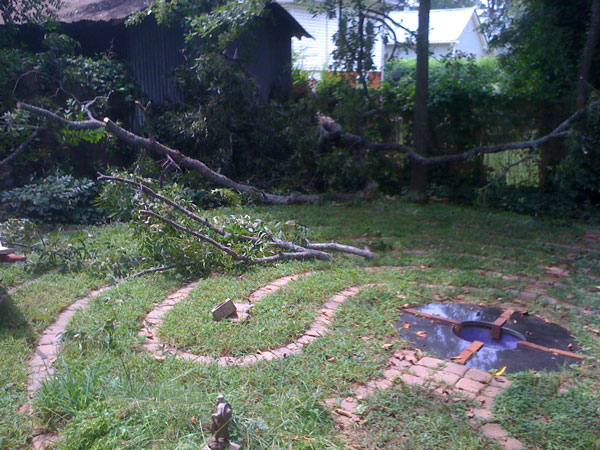 It’s actually kind of easier to see how big the tree was when you’re just looking at the main trunks.

Habitués of the labyrinth will have noticed that the tree crashed right onto several areas where there was stuff that should have been smashed: the south point, the west point, Apollo, a candle stand, more than a couple of clay pots, the bells and lamps in the small oak tree, ferns, that kind of thing. 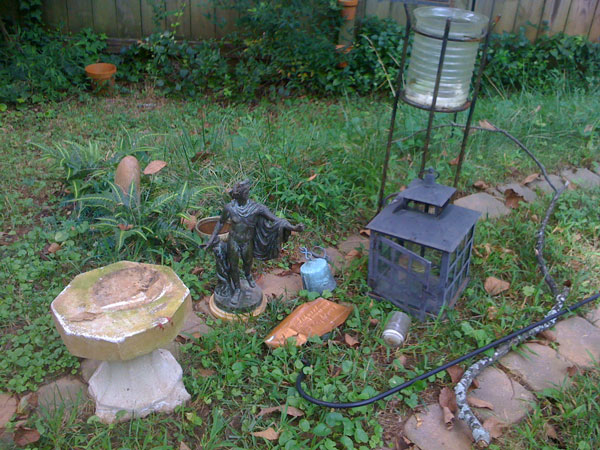 Not one thing was damaged in the least, except for the stand for the lantern. It was bent slightly and was easily hammered straight. Apollo was knocked off his stand, but as I said on Facebook at the time, that’s good for him every now and then, amirite?

The fence right under the tree was dented, but even the bamboo fencing simply bent and didn’t crumble. It was really odd.

As I cleared away the limbs and prepared to whip out the chainsaw to hack up the trunks, I discovered this: 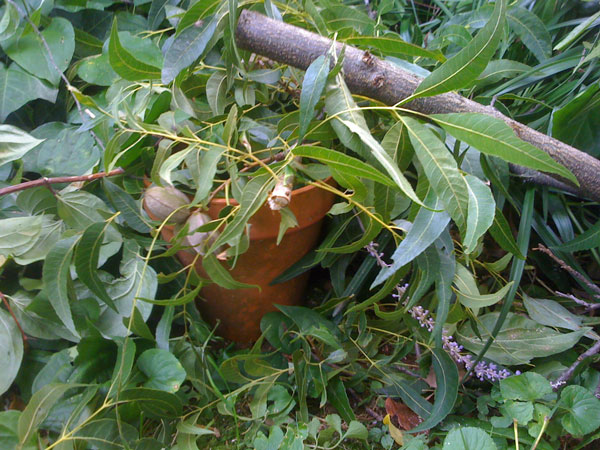 By the time I was ready to whip out the chainsaw, my neighbor Joe showed up with his chainsaw as well. He had stopped by first thing in the morning because he had been outside and seen the tree fall, too. Now he was back to help, and I appreciated the assistance. (Especially after we did some maintenance on my chainsaw and managed to reinstall the blade backwards, rendering it temporarily useless.) So mostly Joe cut and I hauled for a while, till Joe had to go home and do other things.

I continued on my own (this was after lunch), and by late afternoon: 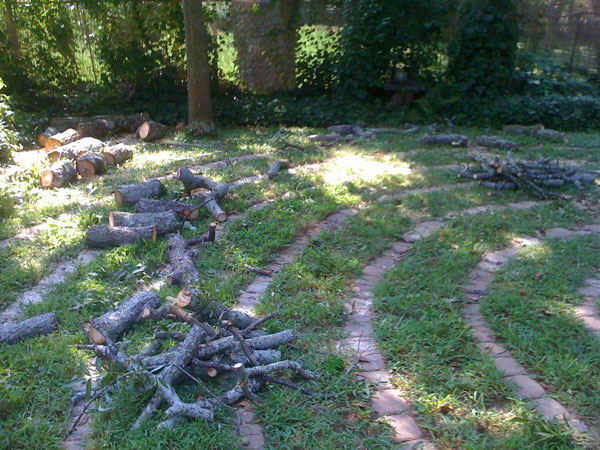 Take that, Nature! It’s all now firewood, an honorable end in the labyrinth, fuelling the flames of meditation and philosophical discussion.

As to what caused it to fall, who knows? The tree is perfectly healthy, as was the huge limb itself. Pecan trees have an inconvenient habit of shedding anyway, and this limb had grown all the way out over the labyrinth, plus was loaded down with pecans—I spent a lot of time raking and bagging hundreds of the things—so maybe it just got too big to sustain itself and cracked off.

The task itself was actually kind of pleasant, since my goal for the day had been to spend it in the labyrinth anyway. So there’s one thing I’ve been up to.