In Seattle last week, we drove over to Fremont, a yuppie/hippie enclave full of funky shops and publicly funded street art. In one of the funky shops, full of locally made jewelry, decorative items and paintings, I was amused to see yet another jeweler making things out of old typewriter keys. There was TAB and SHIFT and :; and all the whole QWERTY gang.

But then I was startled to see a key I had completely forgotten about: MARGIN RELEASE. 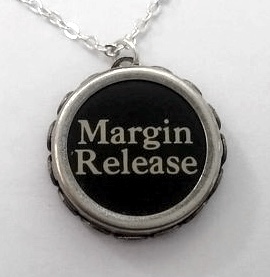 For those who have never had to use an actual typewriter—we’re not talking about those slick last-generation numbers that were actually word processors—let me explain the MARGIN RELEASE key.

First, you had to set your margins by positioning literal metal tabs on the left and right on a bar behind the platen. You also set tabs on the same bar.

Back in the old days, you had to keep a calculation running in your head as to whether the last word you were about to type on a line would actually fit between where you were and the margin. The margin would simply stop you cold in your typing, midword, if you miscalculated.

(Am I remembering correctly? Or was the little bell actually set to go off before the actual margin to warn you?)

If you did miscalculate, you just had to slide the carriage over to start the new line and then remember to go back and manually erase the foreshortened word.

Unless the word in question was short by only one to three letters. Then, depending on the character of the document you were typing, you could choose to press the MARGIN RELEASE key, which, you guessed it, released the margin and allowed you to keep typing.

Nowadays of course the word processor does all your calculating for you. You just keep typing, and when the word is too long, it simply wraps to the next line. We live in awesome times.

I was brought up short by this artifact from my past. It articulated suddenly for me recent aspects of my life that have puzzled me and others in my life. The labyrinth, for example, seems almost like a Close Encounters kind of endeavor. Why? my lovely first wife kept asking as I transformed our barren back yard into some kind of alien landing site.

Why indeed? “Why not?” is not of course any kind of answer. I could only respond that the pattern appealed to me in some way I could not explain, and in the event, it obviously appeals to others as a space of refuge, contemplation, even power.

But now I have more of a partial understanding and answer: it’s a margin release. It allows me to push that button and temporarily go beyond the margins of my quotidian existence, to connect with parts of the universe that unfortunately are not available to me during most of the daily grind. However, my hope is that someday, someday, I’ll get the hang of it, and I can just keep typing off the edge of the page.

So I bought the MARGIN RELEASE charm, hanging on a silly ballchain chain, to wear as a talisman on my new Utilikilt. Look for it soon in a labyrinth near you.

6 thoughts on “An unexpected answer”