I had intended to reseed the labyrinth today with a mix of winter rye and shade, and to plant the daffodils I dug up last spring when I planted the ferns, but plans change. The area where I’m putting the daffodils (the “dance floor patio” on the upper level) was very wet; tomorrow will be dryer. The bulbs seem to have survived for the most part, and some are beginning to put out leaves.

The reseeding I have no excuse for, except I began to think it might be better to wait till the end of the month. I first seeded it on February 1 last year, so I can wait until then this year as well.

I did get some busy work done, getting all the votives prepped, i.e., cleaned and restocked with fresh candles, and getting the Christmas greenery chopped up and stowed away. The air is redolent with fir behind me. We need to have many fires to get all this stuff burned by the end of February. Last year branches lay around until they turned black, and the ground beneath them. I don’t want to let that happen again.

And finally, I decided that since the weather was so beautiful and warmish, I would go ahead and get the bamboo fencing finalized around the men’s loo.

This is the area we’re talking about: 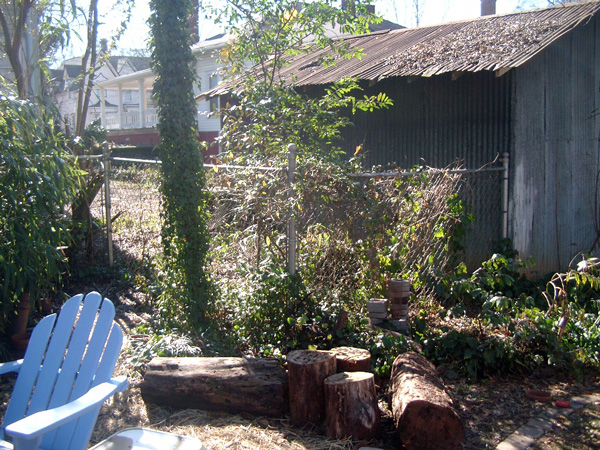 On the right is the area where the tree fell last October, and it’s even more bare now without the overgrown undergrowth behind it. The men’s loo area on the left is even more bereft and open.

So I got to work and in less than three hours I had this part of the yard all fixed up: 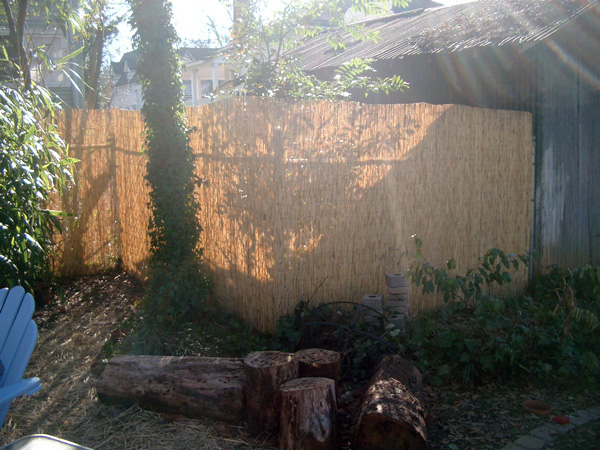 I think it’s going to be very nice. At the very least, it provides a modicum of privacy, and I think by the end of the summer it will probably be covered with ivy and/or honeysuckle, which will provide even more privacy. Then when the ferns recover in the spring, they’ll really look good against the backdrop.

It was not difficult getting the fence up. The back fence should be pretty easy. The rest of the fire area fence, not so easy, because of all the bamboo and having to move the firewood, and I discovered while on the other side of the fence in the Ellis’s back yard that the pecan tree directly behind the fire area is almost totally rotten. So I think I’ll probably wait until that’s down before installing that section of the fencing.

That was enough for the day, I thought, so I’m just sitting out here blogging and listening to the usual iTunes labyrinth playlist and having a drink in memory of Martin Luther King, Jr., and the fact that our country has more often than not decided to do the right thing.

I do have some thinking to do about the eastpoint of the labyrinth. The element connected to the east is Air, and I’ve been collecting items that I think might be an appropriate installation for the east: 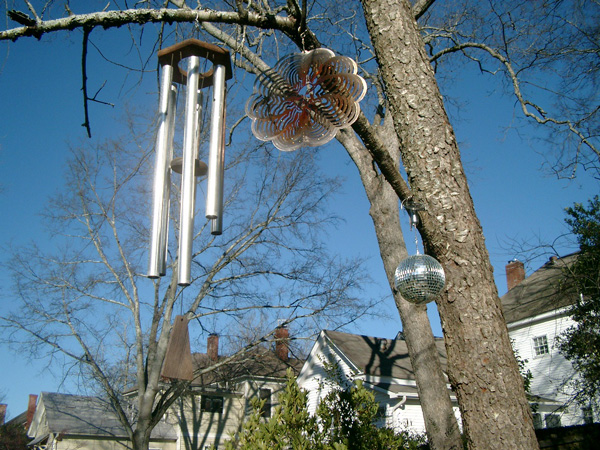 Left to right, we have a windchime, a twirly sun thing, and a solar-powered mirror ball. The windchimes are not the ones I want, they’re just a conceptual placeholder. The ones I would like to install are lower in tone, the “tenor” range. I also have a handblown glass star with a gold center that will go into the final mix. Another option might be prayer flags.

Leaving aside what an idiotic idea a solar-powered mirror ball is, think about it, help me think this out. Here’s the eastpoint we’re talking about: 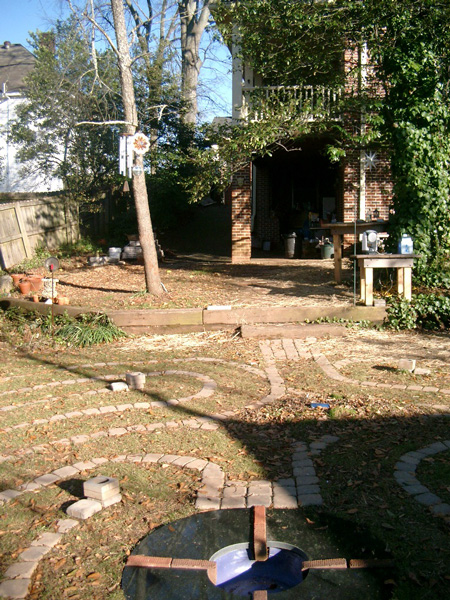 It’s the entrance to the labyrinth. I would like to do something like take one or two of the big pieces of rebar that I have left and create an arch or something over the entrance from which the Air items could be suspended. I don’t want it to be cluttered, like some daft old hippie’s front porch, but simple and understated like the other points of the compass are.