I bought a book on ferns last fall and uncovered it during a recent spate of cleaning. I got serious about looking for some new kinds of ferns for the back yard and actually found a nursery in Virginia, the Crownsville Nursery, that carries a great variety of them. Yesterday, a box arrived with my new babies: 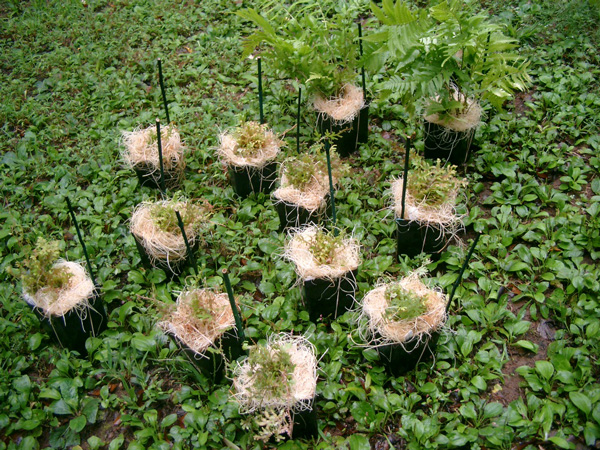 The packaging was quite clever: the packing straw is held in place with rubber bands, which keeps the potting soil from coming loose. Each pot has that stick in it, which kept the top of the box from crushing down or the pots from flying up. All of this actually allowed the larger ferns to travel free and unbroken. I was impressed. 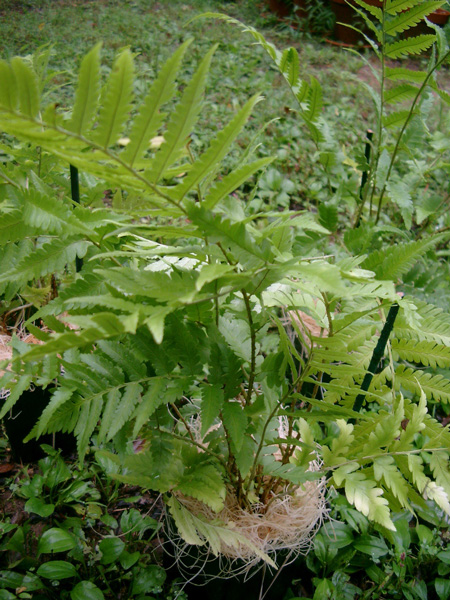 This is the Dixie Wood Fern, Dryopteris x australis, and I got three of them. They’re supposed to grow up to five feet in lenght/height, so I’m thinking of putting them in corners somewhere. I had planted some Ostrich Ferns in such places, but those died off over the summer and don’t seem to be reviving like some of the others that suffered similar setbacks. 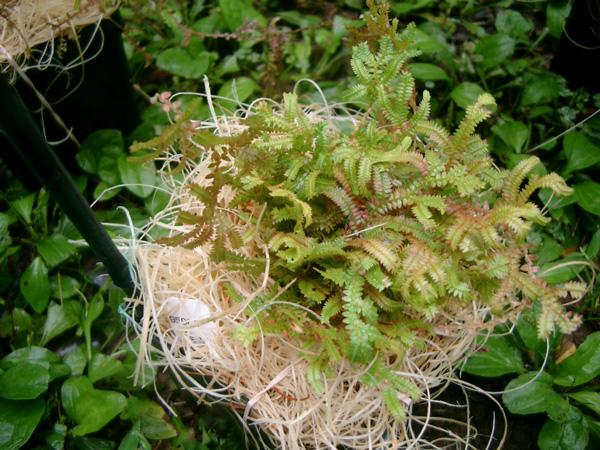 This is a Peacock Fern, Selaginella uncinata, and I got ten of these. They’re supposed to be a good ground cover and actually be an iridescent blue at some angles. I plan to cover the northern bank of the labyrinth with these, and if they do well there, and the Irish Moss fails to thrive in the middle plot, I may use them in the middle as well.

As I mentioned above, many of the ferns I planted last spring died back during the summer heat, but most of them are now putting forth new growth. The most hardy seem to be the Autumn Ferns; they didn’t even flinch at the heat. The Mexican Male Ferns that I planted at the entrance to the men’s loo seem to have perished altogether, although they shouldn’t have. The place I put them is usually moist. Perhaps this summer it wasn’t, however.

I need to go back and catalog the others I planted. I know some were Japanese Painted Ferns, and there was at least one other variety.

I love ferns. I think they’re beautiful in ways that flowering plants aren’t. I agree with the Japanese that flowers in a garden make it “hot,” and that a green garden is a calming one. So far, my semi-wilderness of ivy and ferns is fitting that description admirably.

Anyway, I was going to plant them this afternoon, but the rain has prevented me. Yes, I know I could go ahead and play in the rain, but I don’t wanna. Another task for later.