Before I start: Happy Birthday to two of my favorite people in the world: Grayson Lyles and… Nancy Willard. Is that strange or what? Even stranger, it was just last night that I learned Nancy shared a birthday with my son. As a birthday present to her, since I learned this on Wikipedia, I edited the “stub article” for A Visit to William Blake’s Inn. It is no longer a stub. Go check it out.

One of my creative goals for the summer, you will recall, was to learn the software program Logic Express, which I bought with my new MacBook Pro back in January. Today I started doing that.

You may also recall that I had opened it earlier in the spring, thinking it might have some solutions to the William Blake’s Inn sound issues, but closed it nearly immediately because it was not exactly an intuitive piece of software. It was my worst nightmare, a piece of software that you cannot use without reading the manual.

So I bought a manual: Logic Pro and Logic Express 7: professional music creation and audio production, by Martin Sitter. It’s very clear, and I forced myself today to sit down and start at the very beginning and go through step by step, not skipping anything.

Still, I persevered. We learned how to select tools (but not what they’re for at the moment), controlling playback (although the 0 on my keypad does not make the song stop playing as the manuals suggests it should), and the myriad ways to move the Song Position Line (the playback cursor) from one point to the next.

I learned (in the tutorial song file) to change an instrument’s sound using plug-ins (although the one in the tutorial produced no discernible difference in the little pop piece they’d set up for me.) The idea that I could deliberately control the sound I wanted by knowing which of the controls in the Slow Panning Chorus setting of the Modulation Delay plug-in to move (quick, pick one: Feedback, Width (???), LFO 1, LFO 2, LFO Mix, Vol. Mod., Anti Pitch, Constant Mod., Flanger-Chorus, Stereo Phase, or Mix), that I could deliberately manipulate all those controls on one plug-in (out of maybe fifty?) and know what I was doing, is laughable.

And then I learned how to create a new track and assign an Audio Instrument to it. When I was instructed to select the EFM synthesizer, and a space age thing popped up, 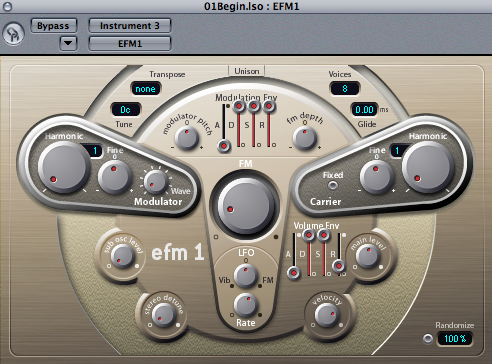 , I freaked. I had to walk away from the computer.

But when I came back, the lesson continued with that little triangle button under the Bypass button at the top of this thing. Down popped a list of instruments. Fabu instruments for all kinds of space music, europop, trance music, rocking out, all that good stuff.

At that point the book had the good sense to say, “Go explore.” So I began to look through all the sounds in all the synths that are residing on my computer inside the software, and Lo, it is good. This is going to be fun. All my Garritan Personal Orchestra sounds are there, via our old friend Kontakt Player 2, plus all these other new sounds, easily mixable. So what if Finale can’t mix the old vocal sounds with the GPO orchestra? Logic Express can.

I ran out of time at this stage of the game. Tomorrow I will have to get back to work on Using Channel Strip Settings. Let’s see if I can remember any of what I read today.