Another amazing Tuesday Lacuna workshop. Tonight, it was me, Marc, and Melissa. 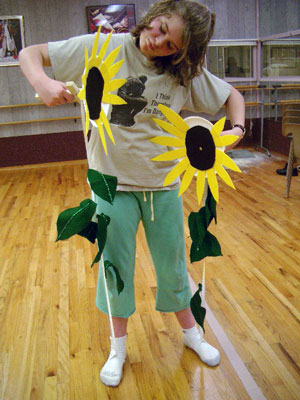 I had mocked up the heads of two sunflowers in the Troupe and made some leaves, so we began by attaching elastic to our feet, then to the crossbars of the flowers. We stapled the leaves to the elastic, and then we played. We played with making the sunflowers grow, making the leaves bounces. We studied how sunflowers would move, how they would jump, how they would dance. We played with one sunflower each, then two, having them relate to each other and to other sunflowers.

The sunflower waltz has turned out be quite workable. It is big and glorious, but that works. I shall finish orchestrating it as it stands.

An interesting thing happened this afternoon as I prepared the CD for rehearsal. I’ve been working on a chopped up version of Two Sunflowers, mostly because I didn’t want to mess with the original in case something went dreadfully wrong (as it appeared had happened first thing this morning when the cellos and basses wouldn’t make any sound for a while.) This afternoon I pasted the song itself back on to the beginning of the waltz segment, which then of course recaps with the second verse of the song. This da capo structure was suddenly, terrifically poignant: the two sunflowers have declared their intention of staying with William Blake, then their Troupe engages in this huge, liberated waltz, and then they come back to their two friends to bid farewell. As the Troupe leaves, the lyrics come to us again, “They both took root in the carpet…” It’s sort of sad in a way that wasn’t there before.

Anyway, we did a lot of good, solid work exploring the movement of sunflowers and positing ways for the waltz to be choreographed.

Here’s what we need: five sunflower Troupe members; the Two Sunflowers; the tea set; the suitcases; the turtle train; an angel costume; a small table for tea. Personnel: the Two Sunflowers (currently sung by Ginny and Denise); five dancer/puppeteers; one angel; and a rabbit, to serve the tea. Lacuna members, check out the What We Need page for details.

Moving on to The Man in the Marmalade Hat Arrives, we did another round of amazing brainstorming. We’ve written the lyrics on a huge stretch of paper so we can start choreographing/blocking, but we haven’t written anything yet.

What all did we decide? The Band/Parade phalanx is slightly creepy in their “inexorable” march forward, but the MMH moves the piece toward something a little more silly as it progresses. Quasi-military band uniforms. Oversized breakfast implements?: spoons for the drumsticks, plates for the cymbals, etc. Discussed some blocking for the MMH, mostly freeing him from a line-by-line literalization. Band moves UL to C; Chorus moves DR to C; both move L to the Parade Ground, joined by the Gang from the Inn. Close order drill.

The banners remain as Parade Ground backdrop for the second half, switching front-to-back as spring arrives. We affirmed the idea of the ice sprites as middle-aged men in loincloths. It’s the kind of detail that will rattle audience expectations. Now all we have to do is find middle-aged men who will wear silver-blue body paint and little else, who can also summon up their youthful ballet training to move across the stage. That shouldn’t be too hard, should it? (I reiterate that I plan to be wearing a tux and sitting in the audience next to Nancy Willard.)

We had a large discussion of the Gang and characters in general, as in how we would portray them. Lots of ideas floated around, pros and cons of having actors in costumes to puppets (and what kinds). An overall design concept: if we allow ourselves to stray from natural colors, then it becomes easier to identify characters whether they are being portrayed by singer/actors or by puppets.

For example, we want a singer playing the King of Cats for his two solos because we need the actor’s face for those showstoppers to work. So we can put the King of Cats in a purple morning coat, perhaps with a green waistcoat (slightly furry), with a high white collar. Then when we get to the Milky Way, the King of Cats would be protrayed by a rod puppet, with all the flexibility of levitation that puppets allow, and it would be not only okay but wonderful for the cat to be a real cat, but a purple tabby with a green chest and an actual high white collar. Flexibility of vision and execution.