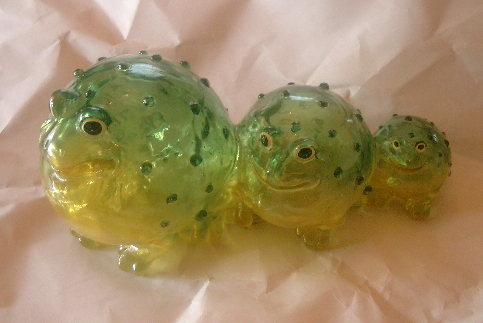 I mean, what the hell, right?

This object was discovered in our local Big Lots, where truly one can find some beautiful things. This was not one of them.

It’s plastic, of course, and it was made in China, of course. But why? Bear with me here, there’s a lot to unpack.

If you go to Big Lots or Wal-Mart or Target looking for a spatula, you will find spatulas in varying shapes and sizes. A spatula’s a spatula, and the amount of thought that goes into the design varies with the presumed “reader” of the spatula. Basic flat spatule, metal or plastic, slotted or not, depending on the intended use; basic stem; basic handle. It is a utilitarian object, one that does not require a lot of thought as to its design. Design has to be deliberately applied to a spatula above a certain level (and I’m ignoring industrial design here, humor me.)

For example, beyond the basic metal spatule/black plastic handle concept, you may get different colors as we move up the design scale, in case your kitchen utensils need to contribute to the ambience. And sometimes, you may get that frisson of delight as you come across Michael Graves’ stuff in Target: oh, look, he’s designed the spatula. Isn’t it pretty? And if you move on up to Restoration Hardware or some other really trendy boutiques, the spatula is no longer merely an utilitarian object, it is an objet.

But for it to get that far, someone has to push it. The spatula doesn’t require that level of design to exist. No one has to suffer any artistic angst to get it out the door.

In order for our frogs to exist, someone had to think, “Out of all the limitless possibilities of the universe, what I think would be best to create would be three puffed up toad-frog-things, in diminishing sizes, made of transparent injected plastic. Hollow, yes, that’s good. And gentle, anthropomorphic smiles on their faces. But otherwise not really recognizable as any member of the genus Rana as we know it. And to make it really pretty, tint the plastic so that it goes from apple green on top to chartreuse on the bottom. We’ll have to handpaint the eyes and lips, though.”

So the artist goes to work creating this objet, and then all the terrific machinery of industry has to swing into action to create the molds, the plastic, the assembly line, etc., etc., and then the Midwestern Home Products company of Wilmington, Delaware, has to import them and distribute them. The questions still crowd in: did these go straight to Big Lots, or did they try their fortune in some tonier place first? Did Midwestern HP (of Delaware), purveyor of other fine products, cause this to be created? (There is some evidence that they did.) And if not, then who in China thought that the American public had a heretofore unidentified need for plastic frog triplets?

There is much about our little frog friends that might be understandable, if not forgivable, if they had been made by some artisan, hand-made-by-hand as we used to say in the costume shop: their squalid cheerfulness, the inexplicable bloated forms, the bizarre, hedgehog-like warts. If we knew that this was one of a kind, or maybe one of a limited series perhaps, from the hands of a not-very-competent glassblower, for example, we could wrinkle our brow, smirk in a self-satisified and über-conscious manner, and let it go with a knowing laugh. The creator hit a dead end. He screwed up. It happens, and you shouldn’t put it out there to be bought, but there it is.

But it’s not. It’s mass-produced. There have to be hundreds of these things, if not thousands, that were stamped out of the assembly line and shipped off to beautify the world. I for one cannot comprehend this.

It produces in me the same feeling I get when my wife and I go antiquing. There, on dusty and unregarded shelves, are legions of tschotschkes produced by the same inexplicable process that produced the frogs. They are without merit, and they are abandoned. No one is going to buy them, ever again. They have no cachet, they are not collectable, they are not even kitsch. They are, to be unkind, jetsam.

This has always caused me a little distress, seeing all this junk just sitting around these shops. It’s not that I empathize with the tschotschkes, you should know me better than that, it’s just the whole Darwinian waste of it all. It’s as if society, in the hopes of achieving some items of permanent beauty, spawns all this crap just to make sure that something survives.

And there’s the appalling thought that for these things to have arrived in the junk shop, someone had to buy them first. That is, someone once thought these little pieces of landfill were beautiful enough to bring into their lives to enrich them. And then someone thought they were beautiful enough not to throw away, but to buy, at whatever discount rate, in hopes of reselling them in the shop. Merciful heavens. What would dear Oscar say?

Still, I suppose I could look at it optimistically: so strong is the creative spirit in humans, that even people who are hopelessly second-rate artists force out these pitiful objects in the belief that they are beautiful. Do they ever realize that they’ve failed? And the people who buy them: are they abject Philistines, or is the human need for beauty so strong that people respond to it in even the most feeble embodiment? Should this objet distress us, or should we rejoice in our little frog friends as representative of humanity’s most divine impulse?