Use to rim cocktails, especially the Sidecar family.

Yesterday a friend emailed me with a request: he really liked this nice tonic water with a lemon taste, but it’s expensive. Did I have a substitute/workaround?

Probably. Not having tasted this particular brand, I wasn’t sure what we were looking for, nor could I find it during my ramblings during the morning.

First, I got a bottle of pure lemon extract and gave that a whirl. For a lowball glass full of tonic water, one drop is enough to give it a strong lemon taste. (Ingredients are lemon oil, alcohol, and water; you could dilute it with more alcohol.) (Also, remember those ingredients.)

It’s easy. Use a vegetable peeler to peel a lemon. 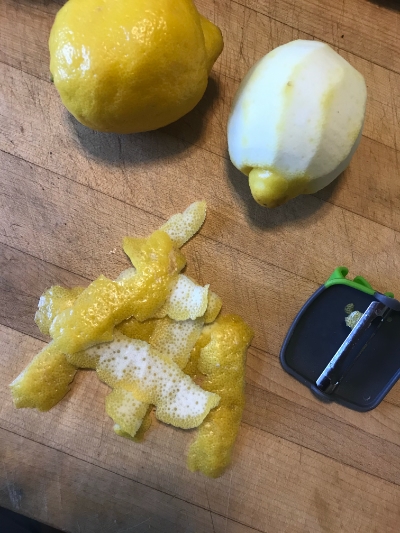 You can leave them whole; this time I cut them into strips. 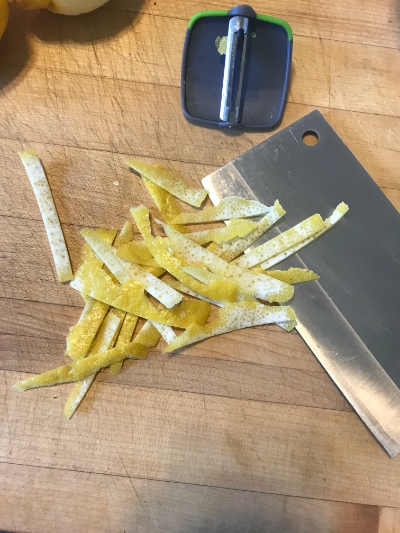 Put them in a bowl with one teaspoon of sugar and muddle them. If you don’t have a cocktail muddler, use a wooden spoon or something similar. 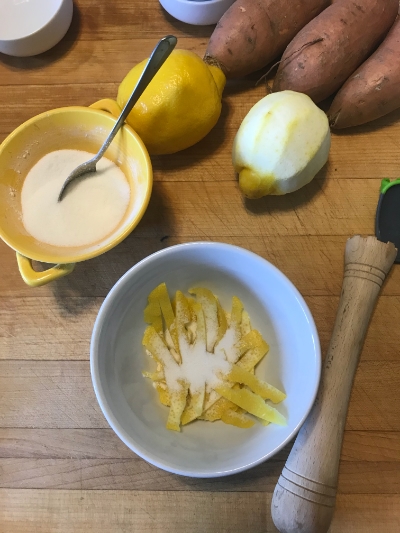 Let it sit for 4–6 hours. The lemon’s oil will ooze out and collect. Add two tablespoons of lemon juice and one of vodka, strain into a container. You have basically just created pure lemon extract from the store, but fresher and a little more balanced (with the sugar) for your cocktail.

One or two drops of this in your tonic water is effective.

Thirdly, you could just use lemon bitters.

There you go. That’s my civic responsibility for the day.

I’m not wild about the name. As you will see, I could also name it the Cedar & Sassafras. Or I could find another gemstone/crystal to name it after, like the Smoky Topaz, the Smoky Quartz, and the Jasper. Time will tell. In the meantime, here’s the new cocktail, which I am wild about.

Quick background: Years ago I made a stab at mixing my own bitters, choosing to create tinctures of all the ingredients and mix proportionately with those (as opposed to dumping all the herbs, etc., into a jar and not being able to adjust anything).

Yesterday, while musing about clearing out two decades of software installation disks, I came across the jar of cedar shavings, still soaking away. Hm, I thought, and began to experiment. (ABORTIVE ATTEMPT)

Manhattan + 1/4 oz of the cedar stuff was astringent. (GESTALT) 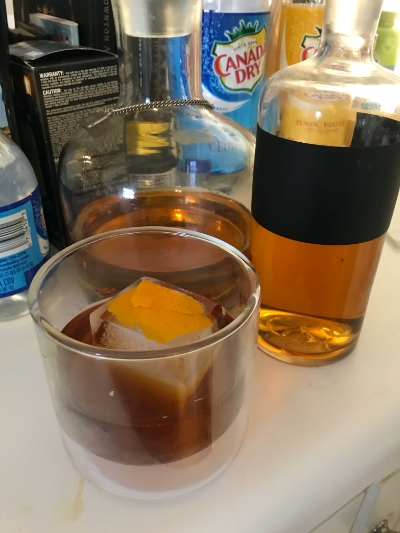 Stir over ice, strain into glass. Garnish with orange peel.

To make the cedar tincture, find “cedar papers,” the kind used for grilling. Break up 3–4 of them into chips and place in a jar. Add vodka, let steep for a week or so, until it’s a dark amber color. Strain and filter. You’re not going to need a lot.

The drink is good: the woodiness and astringency of the cedar is still there, but doesn’t overwhelm your palate on the aftertaste. The maple syrup mellows the overall front of the drink while still contributing to the woodiness. The bitters bolster the flavor of the syrup and provide one more layer to the drink.

I’m not at all sure of the name here, so I’m sticking it with Jasper for the time being, in my ongoing series of gemstone cocktails. 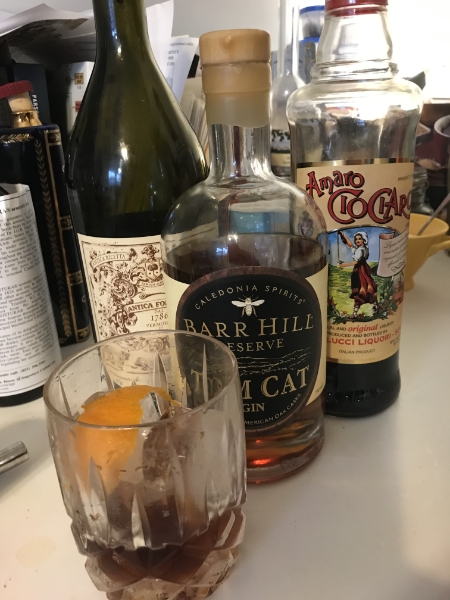 It’s dark, herbal, and the piney bitters give it just enough punch to make it very interesting.

Short prologue: I bought a set of cards with inspirational questions on them to use as writer’s prompts down at Backstreet Arts, and in a fit of masochism decided that if I weren’t actively working on anything while I was down there, then I was required to draw one randomly and answer it.

So today’s question was: 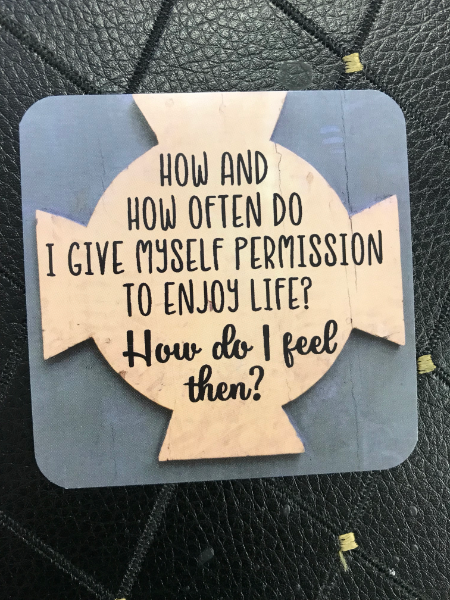 Ugh. This is the kind of gross self-affirmation any of which I do not need. But an oath is an oath, and I think I’d like to share my response.

Ha. I am perpetually self-indulgent. Every day I enjoy what I do—and I do what I enjoy. This idea of not enjoying life is completely alien to me.

This includes the things I have to do, duties and burdens—far be it from this atheist to claim biblical inspiration, but the verse, “Whatsoever thy hand findeth to do, do it with thy might” [Ecclesiastes 9:10] seems to have stuck with me from Sunday School. Why not commit to your tasks with joy and appreciation?

It’s certainly not the case that I am a Pollyanna about life—there is plenty in my life that frustrates me or makes me unhappy. But it has never made sense to me to regard all of life as roadblocks. For one thing, taking things “personally” is the quickest way to misery: if the universe is out to get you, how are you supposed to enjoy your existence in the face of that?

To revisit the Ecclesiastes, here’s 9:9–10 in the International Children’s Bible:

9 … Enjoy all the days of this short life God has given you here on earth. It is all you have. So enjoy the work you have to do here on earth.

10 Whatever work you do, do your best. This is because you are going to the grave. There is no working, no planning, no knowledge and no wisdom there.

Here is existentialism in a nutshell: this life is all you have, and it is not long. Choose to do well at it. Choose to live it with joy.

So yes, I make cocktails and sit in my labyrinth. I read. I make dinner and run errands. I write letters. I go to burns. I serve on the burn board of directors.

I try to do it with “all my might”—why do it grudgingly? Do it with joy, and then you don’t have to find a way to give yourself “permission” to enjoy life.

I seem to have skipped MDL GinTonic Nos. 3–6. I’ll have to go back and try them again to make sure they’re worth posting.

However, MDL GinTonic No. 7 is a good one:

It is distinctly floral without being sweet. I’m still thinking about bitters; I thought I had some 18•21 Bitters hibiscus bitters, but apparently I’m out.

This is stupid-easy: put some gin in a glass container, throw in some hibiscus buds, let it sit for an hour or two. Strain. Done.

So you can see that this is kind of an Ultimate Gin gintonic, with three different approaches to gin all piling together.

Sweetness, then the floral bitterness of the hibiscus. This is a nice one.

* Dump a tablespoon or two of dried hibiscus into a cup or so of gin. Let steep for a couple of hours. It will turn dark red. (You could also do a light steep for pinker look, and that concoction is more drinkable on its own. The full steep is a bit much.)

During our travels through Italy last fall, I was delighted to discover the European GinTonic: a gin and tonic with some differences, some tasty, tasty differences. First, it’s not served in a highball glass — it’s served in a big red wine glass. It’s got tons of ice, and rather more tonic than we use here in the States.

The big difference though is the palette that is offered by such a setup. Just as here, you have the full range of gins to start with — London dry, Old Tom, Plymouth, modern botanicals —and if you’re picky, the type of tonic water. Then you can add stuff: garnishes, other spirits, etc., and the sky is the limit. The result is a universe of flavors and sensations, and that is the universe I have begun exploring in a new series of cocktails. I’m calling them MDL GinTonics because my initials are MDL; it’s all about the branding, you see. I vacillate between ‘#’ and “No.” in the naming system, so historians, here’s your fair warning: there may be contradictory evidence in your research. 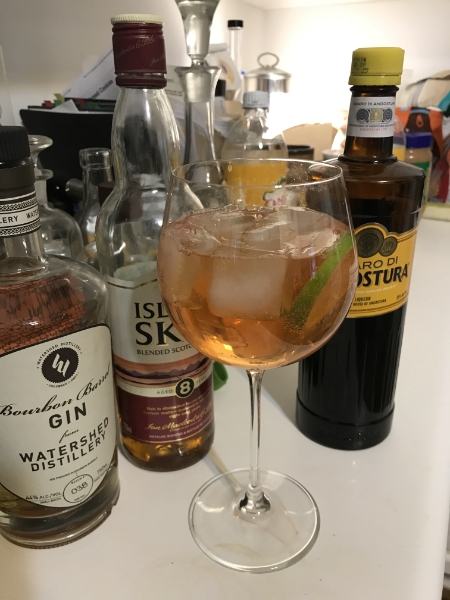 Stir the first three ingredients with ice, then strain into a balloon-shaped wine glass filled with ice. Add tonic water and lime wheel.

This GinTonic is very tasty, with the oak/woodiness of the gin forward, followed by the spiciness of the Amaro, and finally a return to the earthy/woodsy tones of the Scotch. It is now one of my favorite drinks.

Variation notes: I tried using Laphroaig instead of Isle of Skye, but the strength of that single malt was too much. I also tried bumping the Scotch up to .5 oz, but the drink is better, more subtle, at .25 oz.

Shopping notes: the Amaro Angostura is becoming more common in liquor stores catering to the cocktail crowd, but barrel-aged gin can be hard to find, and Isle of Skye is uncommon. Buy them when you see them!

UPDATE: Famous Grouse Smoky Black works as a substitute for Isle of Skye and is much more readily available.

It’s the holiday time, and we have found ourselves with more than the usual amount of Laird’s Applejack Brandy lying about (long story), so here’s my first and obvious cocktail thereby: the Apple Pie, Jack. It truly tastes like an apple pie. 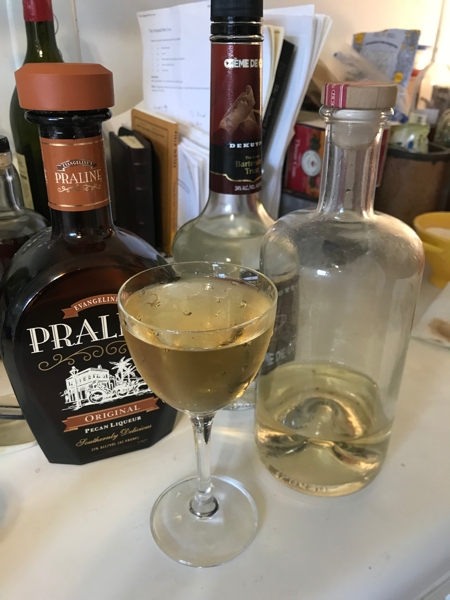