Part of the fun of any major trip is buying All The Things, right?  Even though we are in death nesting mode, I still found a few things I could not resist.

In Vienna, the Haus der Musik is open till 11:00 pm, but when we bought our tickets at 9:00 the young man cheerfully told us the gift shop closed in an hour, so of course we went there first.  And the first thing I saw were these wooden drums: 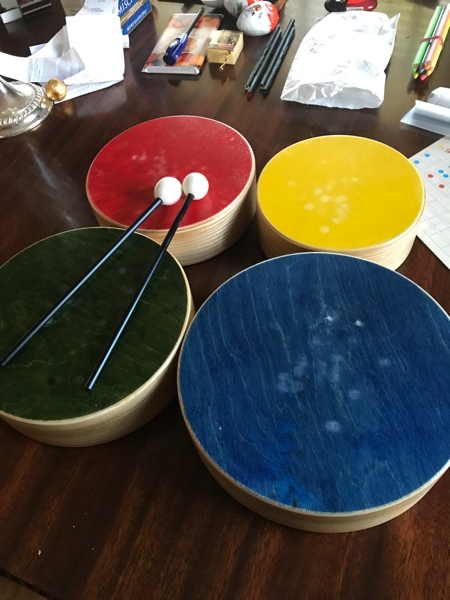 They have a great little tick-tock sound.  They come with little cards for die Kinder, but I plan to make great use of them to annoy the neighbors, if not here then at a burn.  (You hear that, Black Lodge?  You just keep that karaoke going until 2:00 in the morning.)

At Faber-Castell’s gift shop, you will recall that I had no choice but to buy new ink for my brand new replacement fountain pen. 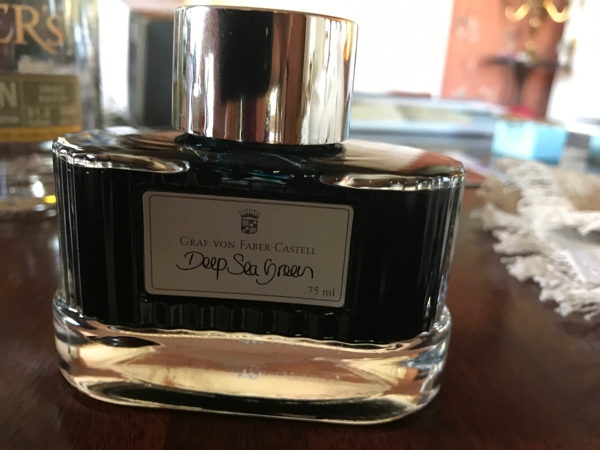 I really wanted the grey ink, but I’ve had correspondents complain that it’s hard to read.  ::sigh::

In Nuremberg, I found this little charm, which I think is supposed to be a Christmas ornament, but it’s going on a little chain I have added to my Utilikilt for burn events. 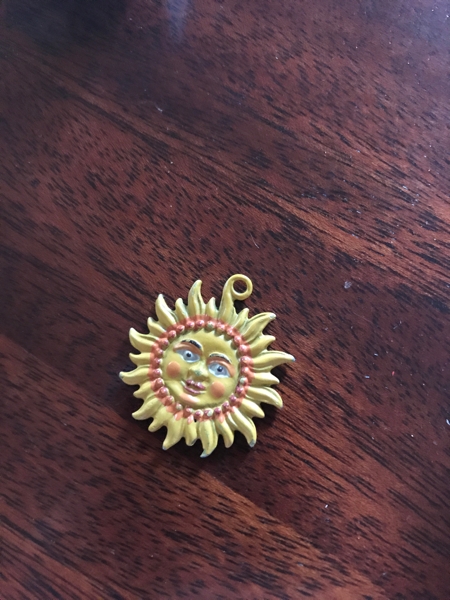 Likewise in Nuremberg, this little lizard spoke to me at a street vendor’s stall and asked to be added to my collection of lizards. 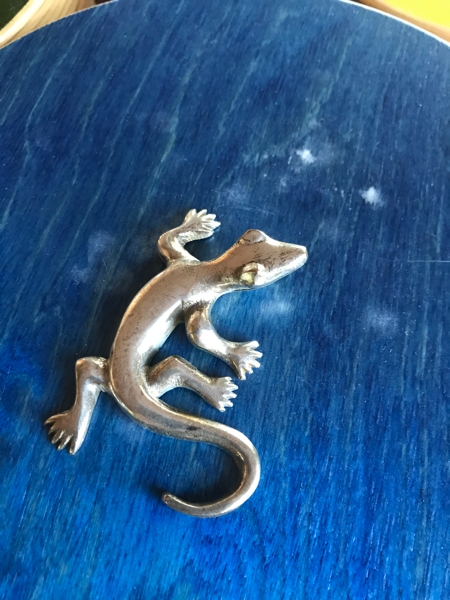 I did a lot of shopping in Prague mainly because I had the time to do so.  At our first lunch at the cafe, there was a crafts market set up in Republic Square.  I was attracted to the weaver and his wares.  (His young helper who helped me find the right size of shirt and hat had spent last summer in Florida with his girlfriend who was working there; he liked Savannah, he said.) 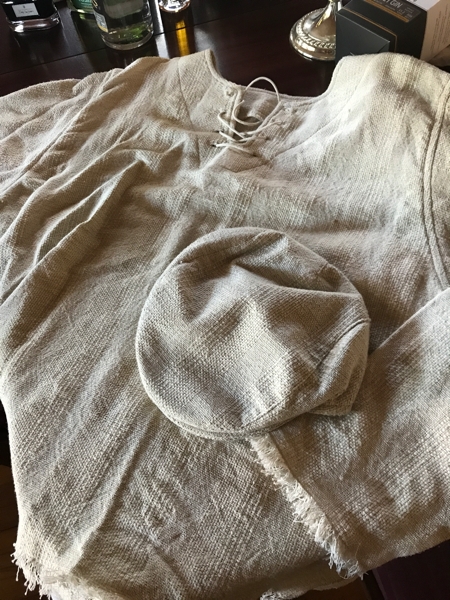 Strolling back to the hotel one day, my lovely first wife was attracted by the window of a glass art company, and so we popped in. 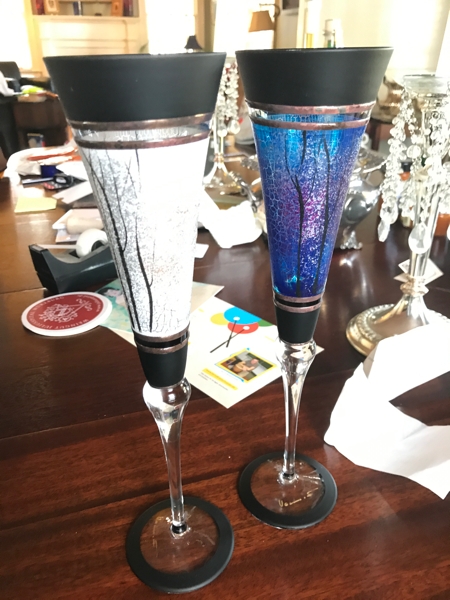 She wanted just the white champagne flute—we really have no more room for glassware—but the owner was quite piteous with her “but the box is for two..” gambit, and so I picked out the blue one.  Since we have until recently given ourselves a pair of champagne flutes for our anniversary, we were happy with our choice.  (I stopped doing this last year because a) we have no more room; and b) death nesting.)

As we waited for the concert our last night in Prague, I was attracted to a store selling Czech garnets and amber.  After some deliberation, I ended up with another pendant for my kilt chain. 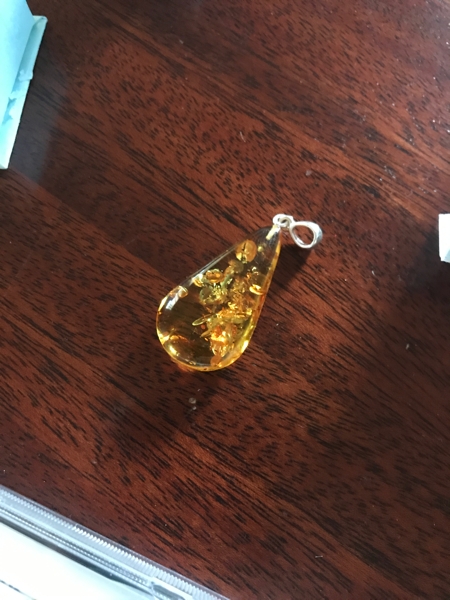 I can’t explain my attraction yet.

And finally, my booze haul. 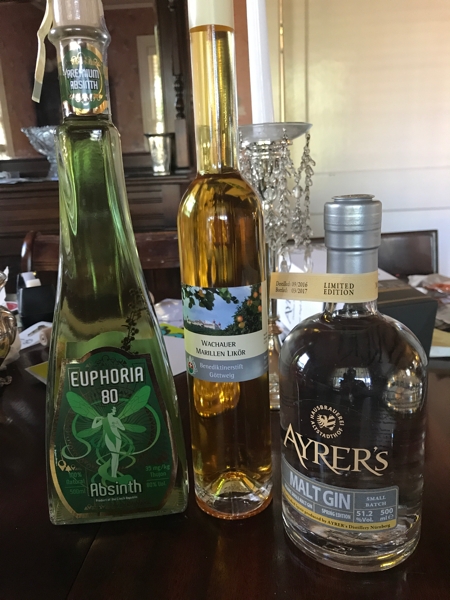 In the center, the apricot liqueur from the Göttweig Abbey in Krems.  On the left, absinthe from Prague, which is going to the burn with me tomorrow.  (The deal is that Euphoria, the spring Georgia burn, had to be cancelled at the beginning of May; many of us are attending the Tennessee burn, so I’m offering this to the Euphoria refugees as a “shot of Regret.”)

And then there’s the Ayrer’s Malt Gin.

This is the gin that I made a mad dash back to the store in Nuremberg, arriving just as the shopkeeper locked the door.  Was it worth it?

This is a small batch, single malt gin that will never be mixed with anything.  I am going to sip it in thimblefuls.  You may be allowed to watch me, if you’ve been good.

Usually I am not a fan of heavily floral gins, but this one is Elixir.  Very strong citrus notes, both lemon and orange. Undergirdings of hops.

We will now begin searching for an American distributor.

I have one last Danube story, about the cocktail that AnonymouS Bar created for me, but it will have to wait until I get back from Camping with the Hippies™ on Sunday.