As I work my way through the text of my putative book on the creative process, you might like to read the rest of the text so far here. Also, the rest of my meditations on the process here.

The sure conviction that we could if we wanted to is the reason so many good minds are idle. —GCL, K.27

The core value of Lichtenbergianism is procrastination, not doing All The Things. 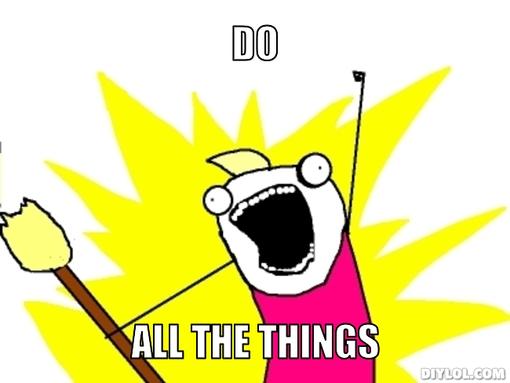 Procrastination is generally supposed to be a bad thing. “Never put off till tomorrow what you can do today” is the sturdy, Puritanical maxim. Clean that house, compose that song, write that chapter, update that website—and do it now! After all, won’t you feel better when it’s done?

Well, yes, of course you’ll feel better when it’s done, but first you have to do it. Ugh.

To a Lichtenbergian, though, procrastination is a core principle. Avoiding that symphony, that second draft, that new series of photographs… That’s a lot more comfortable. Cras melior est. Tomorrow is better.

But why is TASK AVOIDANCE considered to be a critical Precept of Lichtenbergianism?

Part of the joke is that we think that the world be better served if artists of all stripes thought twice before releasing their works on an unsuspecting public. It’s a matter of quality control, really. It’s one thing to crank out the ABORTIVE ATTEMPTS; it’s quite another to assemble them and release them as your band’s CD. Or book of poetry. Or Southern gothic novel.[4]

We call it the “Better as a T-Shirt Rule,” e.g., a Cafe Press t-shirt vs. the permanence of a snarky tattoo. Don’t commit to permanence when there’s still SUCCESSIVE APPROXIMATION to be done. You can always take a t-shirt off; you can always go back to an unpublished poem and take another look at it. Not so much with an hastily-considered tattoo, nor with a published collection of unrevised diary entries posing as poetry.

It is good when young people are in certain years attacked by the poetic infection, only one must, for Heaven’s sake, not neglect to inoculate them against it. GCL, L.69

Let’s face it: 90% of everything is pure dreck. Dreck is fine—see “The Bad Penny” in the previous chapter—because without people having the courage to put their dreck out there, we’d never get the 10% that’s actually worth something.  God bless all the lesser but nevertheless competent composers that dotted the musical landscape of the Age of Enlightenment, as Professor Peter Schickele called them—without them, Mozart wouldn’t have had a market for his perfection.[5]

But if we, as creators, can hold back our dreck until it’s worth at least as much as the bottom 90%, then let’s do that. Cras melior est!

Here is the secret to successful TASK AVOIDANCE: because you are an artist, you have more than one Task to Avoid, each one nagging for your attention. The trick is to play them off against each other, avoiding one by working on another.

This very book (at least at the time of writing this sentence) is being written to avoid the pain of writing music.[6] Not only that, but in the process of writing every section of this book, every other section proved a suitable distraction. Stuck on the AUDIENCE chapter? Jot down that note in your head on GESTALT that has been doing its best to distract you.

The very first full year of the Lichtenbergian Society I failed to achieve a single goal, mainly because I got distracted and built a labyrinth in my back yard instead:

In fact, often the Lichtenbergians will find that although we didn’t achieve what we said we wanted to achieve in any given year, we have done something else of value while avoiding our actual goals.

This is what John Perry calls “structured procrastination” in his charming and perfect The Art of Procrastination. I would say that Dr. Perry had beaten me to the draw on the concept, but as I said in Chapter One, none of this is new— he himself quotes a 1930 Robert Benchley column as defining the concept even earlier: “Anyone can do any amount of work, provided it isn’t the work he is supposed to be doing at that moment.”

As Dr. Perry puts it, “The key idea is that procrastinating does not mean doing absolutely nothing… The procrastinator can be motivated to do difficult, timely, and important tasks… as long as these tasks are a way of not doing something more important.”[7]

In 2003, for example, I was given permission by poet Nancy Willard to set her Newbery Award winning A Visit to William Blake’s Inn to music. Since there was some interest in performing this piece as part of an international sister city thing, you would think that I would have gotten right down to it.

Instead, I spent 2004 writing a children’s opera for a competition in Germany—which needless to say I did not win.

The good news is that I went on to finish William Blake’s Inn with an increased confidence in my abilities to orchestrate, and the final result is still my proudest achievement.[8]

[1] This is one of those “memes” you’ve heard tell about. I will be using lots of similar pop culture allusion. I may be old (spoiler alert:[2] I’m old) but I try to stay aware of all internet traditions.[3]

[4] We call these premature releases Corroborative Evidence and we shake our heads sympathetically—there but for the grace of Apollo—as we consign them to the flames. [see RITUAL]

[6] The opera Seven Dreams of Falling.

[8] And if you’re looking for a world premiere piece for your organization, call me.