We shared some homework each of us had done re: winter/spring images for the MMH’s banners.

Marc had done some nice sketches of dead leaf/new leaf, snowflake/sun that were good. He had a fun pennant with a hibernating critter on it.

Melissa had a two sided banner, to wit: 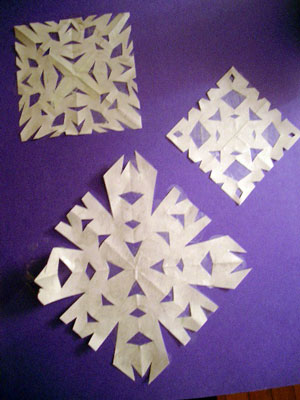 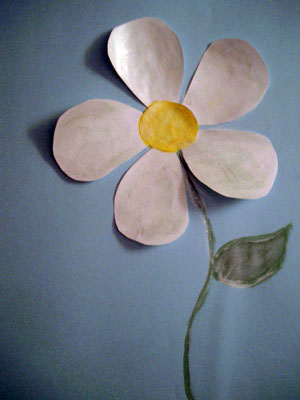 Still, the image is compelling, and we thought that maybe this kind of image might be an interesting way to proceed. 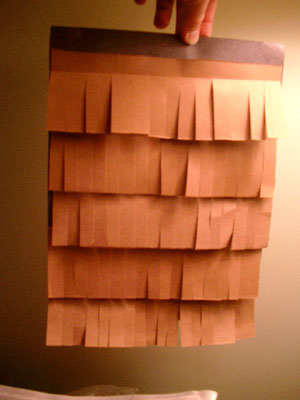 Hard to tell in the photos, but the one on the left is brown, the one on the left is yellow. There would be lots of movement in it. Marc had the idea of putting an image like mine or his on the dangly bits. Dale remembered the image transfer sheets that all the artists are using these days: we could transfer a photo image like the winter tree directly to fabric, then cut it into shreds.

We talked about what to make the banners out of. Dale pointed out that if we made them out of muslin and painted them, it would be cheaper, we’d get the colors we wanted, and they’d be stiff as if starched (our other motif in MMH.)

Laura had run out of time to work on the hedgehog approximation. She left it at home, but will bring it next week.

Dale had brought in a Toast Head approximation: 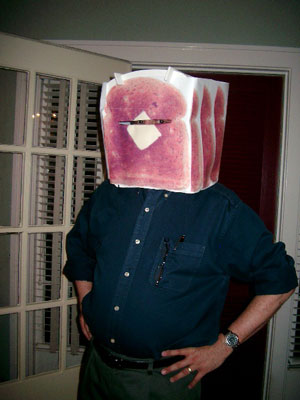 The photo printout was sort of a cheesy stopgap, because he thought the sides needed to represent a stack of toast; otherwise we risked people thinking they were Bread Heads. But everyone liked the photorealistic approach. We will continue to explore that. Dale thinks the butter is too distracting; Mary Frances liked it. Mary Frances wants the chorus to be the Toast Heads, which is not an impossibility.

Mary Frances played with the Sunflower Carol Lee had re-approximated. She had some interesting new takes on things that could be done with them, including having just one sunflower per dancer/puppeteer.

We moved into discussion of the Inn: what will it look like? Marc had already posted some ideas previously on the Lacuna blog (here), and he had some sketches of Swiss Army knife-looking contraptions, which allowed various pieces of inn/set to fold out.

Dale whipped up a little model… 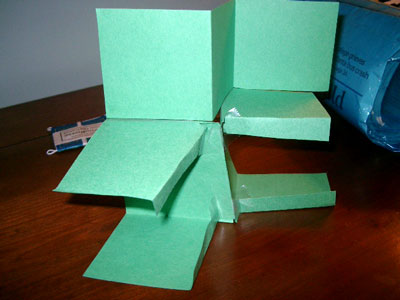 …based on ideas he had while daydreaming during last night’s Masterworks concert. The two square, two-leveled platforms could emerge from the wings, unfold, then walls could pop up and unfold, with perhaps a pediment flown in, etc.

Dale also talked about an idea he had based on Marc’s ideas, wherein we provide frameworks and then the walls are puppeteered in and out. He suggested that for the May 3 performance, we could have the MMH bustling “from room to room” by having the rooms move around the MMH.

Marc then built an elaborate periaktoi with all kinds of flaps and foldouts. Periaktoi… 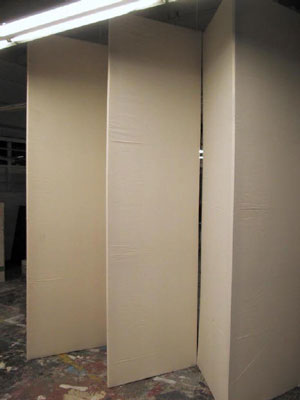 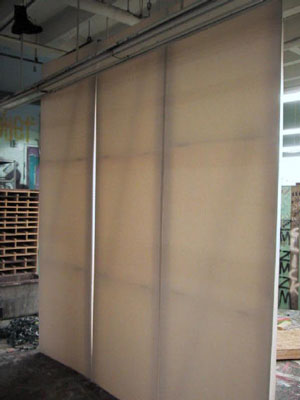 …seen here in back view and front view (from hstech.org), are rotating triangular arrangements of flats. You paint a different scene on each face, then rotate them for changing scenery.

We thought this might be an easy way to do the Inn, at least for May 3. We’ll pursue it. Marc suggested doing the photorealism thing in a collage style, of architectural elements, not necessarily in a naturalistic manner, of course.

We have two more workshops until spring break, so we’re going to spend both of them creating the visuals for the projected version of Sun & Moon Circus. Bring your color, cut & paste supplies and play with us! You can download a PDF storyboard here.

What have I left out? Comments…