Here are a couple of books I have read recently and can highly, highly recommend: Autobiography of Red, and Red Doc>, both by Anne Carson.

They are amazing.  They were recommended to me by Daniel Conlan, a hardcore reader, during a discussion of Seven Dreams of Falling and its use of myth. Carson uses the mythical characters of Geryon, a red-winged monster, and Herakles, who kills him as one of his Labors.

In Carson’s story, Geryon is a boy, still red and winged, who struggles through his autobiography to come to terms with who he is, both as a human and as an artist.  Herakles comes into his life as a teenager, a ne’er-do-well, only to part after a brief affair.  Years later Geryon, now a photographer, re-encounters Herakles and his new boyfriend in Buenos Aires.

It is gorgeously, sumptuously written in prose poetry, and your head spins with the imagery and music in the language.  You come to love and pity and admire Geryon while not quite hating Herakles nor his boyfriend.

Somehow Geryon made it to adolescence.

Then he met Herakles and the kingdoms of his life all shifted down a few notches.

They were two superior eels

at the bottom of the tank and they recognized each other like italics.

And then I ordered Red Doc>, the sequel.  It just came out last year.

From the back of the book:

“Some years ago I wrote a book about a boy named Geryon who was red and had wings and fell in love with Herakles.  Recently I began to wonder what happened to them in later life.  Red Doc> continues their adventures in a very different style and with changed names.

“To live past the end of your myth is a perilous thing.”

Well, that’s an understatement.  If Autobiography was gorgeous, there are no words for Red Doc>.  Hallucinatory, perhaps.  Hallucinogenic, even. 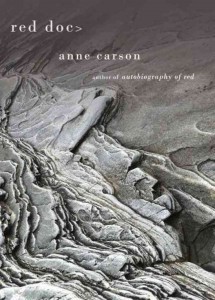 DO NOT TURN his
photographs he had them
out the other day spread
all over the floor I said
who cut out the faces. He
said I can’t sleep I can’t
remember what to think
about when I’m sleeping I
said why think just sleep.
He said I found her bloody
eyeglasses in the grass
after nothing else was left
not even.  Not even what I
said. Not even the
stupidfuck white plastic
shopping nothing her
family could. Bury
identify keep turn. One
lens smashed the other.
Why cut I said he said
they needed more shadow.
Okay.     The    other
okay.      The     other
okay.

The beauty, it burns.  I’m about halfway through Red Doc>, and I’m taking it slowly.  Otherwise I emerge gasping for light with no clear idea of where I’ve been.

How is it possible to create something this beautiful?