It dawned on me that I never explained why we were driving to Toronto.  Our good neighbor Sue, having discovered after living for 20 years in the South that she couldn’t take the heat, bought a cabin in upstate NY, to which she decamps every May.  We promised to come visit last year, but didn’t because things, so this summer we swore we would make it.

I will confess that since part of our plans involved going to see the Erie Canal, I never tumbled to the fact that her cabin is actually on Lake Ontario, but I’m not changing the names of these blog posts now.

None of this explains why we[1] chose to DRIVE TO TORONTO, KENNETH, especially when we passed a perfectly good airport on the way in.

Anyway, we awoke on our first full day in Toronto and set out to check off some things out of our[2] Top 10 book. Everyone humors me if there are labyrinths or world class cocktail bars involved, and so the first thing we did was to go seek the labyrinth at the Eaton Centre, near which our hotel is conveniently located.  The Top 10 book was very excited about the Eaton Centre, assuring us that Toronto practically centered (centred?) on it. 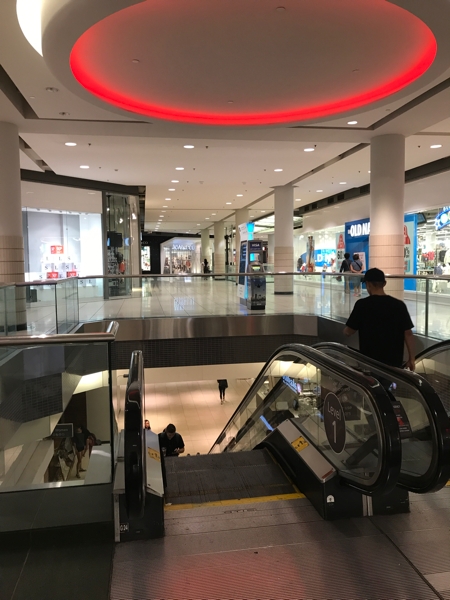 It’s a large and lovely mall, but it is a mall.  None of the mall workers seemed to know where the labyrinth might be or even what it might be. 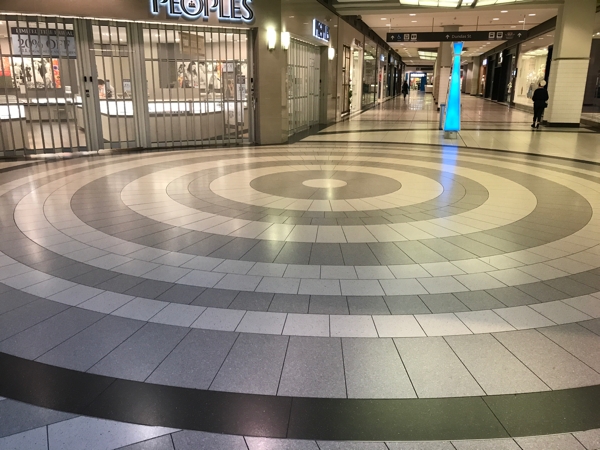 This is not it, despite our cruel Canadian jokes.

The Eaton Centre was mimics the famous Italian shopping district, which had the distinct advantage of roofing over venerable 19th-century architecture. 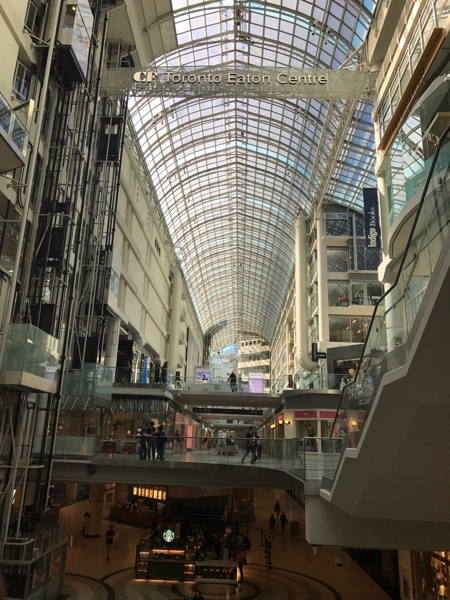 Eventually we found a customer service person who gave us directions. It’s outside next to the Holy Trinity Church, whose mission has become serving the homeless, of which there are many. 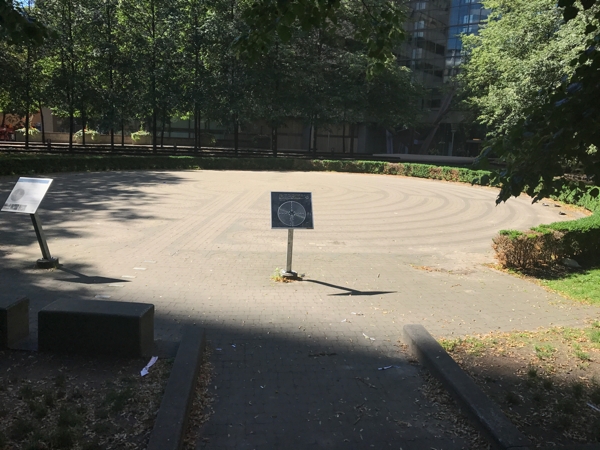 It is a Chartres-style labyrinth.

I liked this: it’s an explanation and a diagram for the blind.

The Chartres-style pattern is not my favorite because it is so long, and it’s difficult to concentrate on the walk when you know everyone else is standing around waiting for you to do your hippie thing and get on with it. 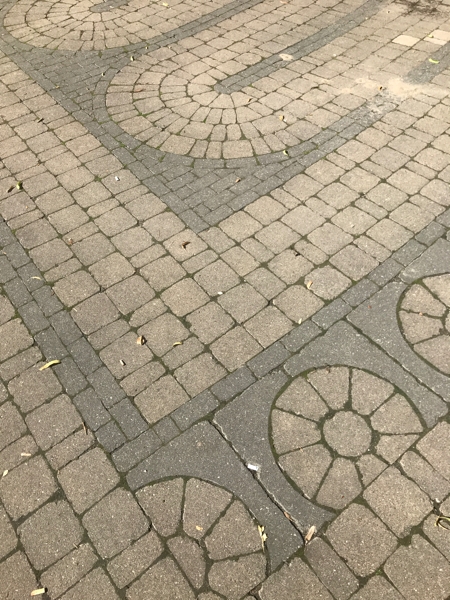 I presume it’s built on packed sand, because the paths themselves have sunk ever so slightly inward after being walked on.

There were some pretty chill pigeons: 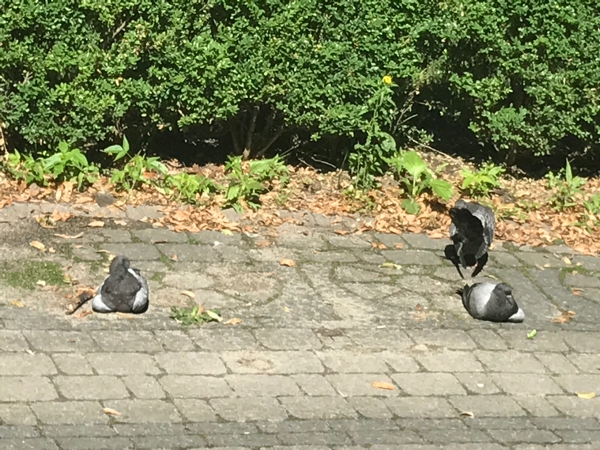 From there it was on to THE BUS TOUR, KENNETH.  We got on top of a double-decker bus and rode around the city.

Now Toronto is a perfectly cromulent city, vibrant with lots o’ culture and stuff, but riding around being told very brief snippets about this or that is truly not my thing.  Our tour guide was pleasant and entertaining, but short on substance. For example, when was the city founded?  What does Toronto mean?  What was its main function?

I will say that Toronto has some really neat architecture: 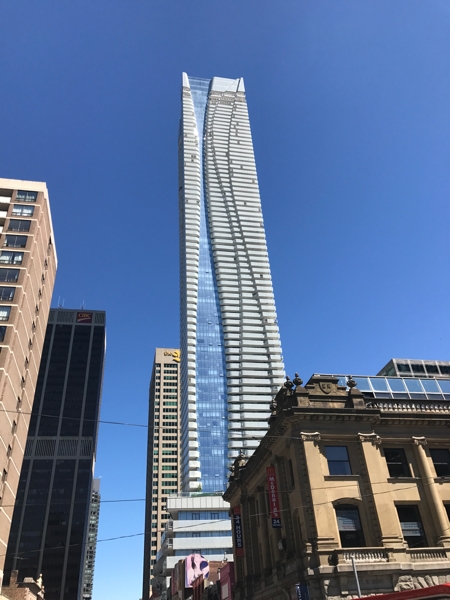 There were many examples of funky post-modern everywhere you looked.  Some discussion of styles would have been appreciated.

The Royal Museum, aka The Rock, aka the Crystal: 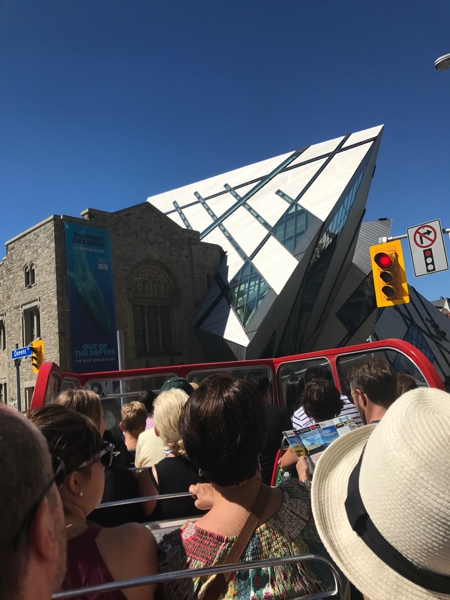 It’s the natural history museum, and the outrageous addition looks like a giant crystal crashed into the 19th-century original.

There is also a shoe museum.

We eventually got off the bus at the Distillery District, which used to be a major distillery back in the day but is now a pleasant pedestrian shopping area.  After endless waverings, we had a good lunch at a cheese shop.  (Thank goodness the converted building with the 120 food stalls was closed for the holiday—we would have collapsed from indecision and starvation.  Well, some of us would have.) 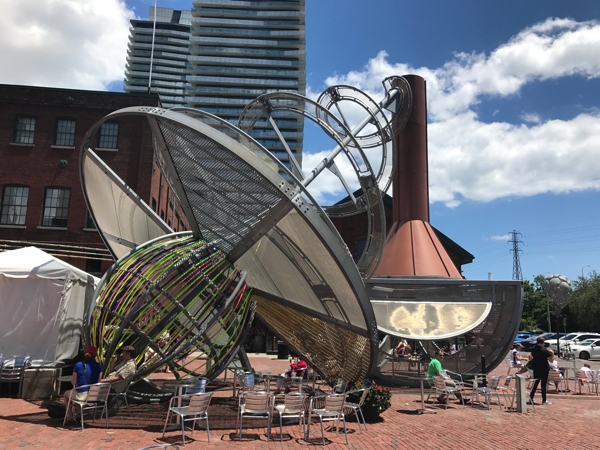 Then we visited an actual distillery, where we sat for a tasting with a cute young man who walked us through their philosophy and process.  (I call him “cute” because he and his cousin were working the place, and they had his aunt in for the day—a holiday—to assist by washing dishes and being fairly entertaining herself.  Also he was cute.) The space was lovely, all dark woods and educational displays and a leather travel case I should have bought.  Their vodka and gin are single-distilled.  The vodka has rather more flavor than usual; the gin rather less juniper than usual.  I bought one of each.  (We also sampled an aquavit they were working on, and if you like drinking pure caraway seed, you would have liked it.)

At this point I should mention that as we began our day, my lovely first wife [LFW] stepped wrong on a broken pavement tile and injured her ankle.  By the time we got to the distillery, she was in a lot of discomfort, so we made the decision to explore the Canadian healthcare system.  We got back on the bus to head back to the hotel, which was only a couple of stops—and we passed St. Michael’s Hospital right before our stop.

We hobbled back to the hospital, were flummoxed for a while because of the construction around the emergency entrance, then went on in.

Spoiler alert: LFW sustained no real injury, no fractures or breaks, just “soft tissue damage.”  Compression bandage and pain relievers is all we ended up with.

Upon entrance, we realized immediately we were in a television series set in a hospital, and it wasn’t long before we realized that the main characters were the young and incredibly attractive EMTs.  The rest of us were supporting cast and, in our case, extras.  I impressed upon the LFW that she should try not to become one of the main plot lines by throwing a clot or something.

I know you’re dying to know, so let me tell you about the basics: overall, you wish your ER visit was like ours.  No, healthcare is not “free”; one of the two pieces of paper we saw (TWO PIECES OF PAPER, KENNETH) had a price list of charges, only two of which were circled for us.  However, all the Canadians just handed over their medical card, so they didn’t see that particular piece of paper.  For them the care was free.

The triage nurse came out and canvassed those who were there, asking them for their cards and what the deal was.  She then called people up in triage order.  After she finished with them, they went around to the intake staff, who got everything into the computer, issued the paperwork and barcodes and bracelets.

Then you went back to the Ambulatory waiting room, which because of the construction/renovation was cramped and hot, but everyone seemed to be in good spirits.

It is not a joke that every single staff member (and all the patients) were absolutely Canadian nice.  Out in triage we watched the handsome EMT coax a homeless guy he’d brought in to let him have his medical card, and when Matt (the homeless guy) didn’t want to comply, the EMT just patiently waited.  When Matt announced he was going outside for a smoke, the EMT let him, only making him promise he’d come back in.  Matt came back in.

Another homeless guy was wheeled in, and when he refused treatment for reasons unknown, unstrapped himself from the gurney, and left, the EMT’s only response was to shrug and say to his partner, “Another satisfied customer.”  Then when Homeless Guy #2 came crashing back in, holding his crotch like a four-year-old and yelling, “I gotta pee!  I gotta pee!”, the triage nurse simply said, “Well, stop standing there and go pee!”

Later, as we were leaving, Homeless Guy #2 was in clean clothes, still out of it, but holding a sandwich which the staff had gotten him.

Everyone apologized for the wait, even though we were there for about three hours from triage to discharge.   Discharge consisted of the doctor wrapping LFW’s ankle herself, advising LFW to ice it, then wishing us bon voyage.  We hung around another ten minutes trying to make sure there wasn’t more that was supposed to be happening.

We were on our way back the hotel (one block away) in time for dinner.  As we left, Matt was out in the middle of the street, helpfully helping a delivery truck that did not need his help back into the loading area.

Part of our bus tour ticket entitled us to a boat ride in the harbor, so off we went.  (LFW is unstoppable when on tour.) 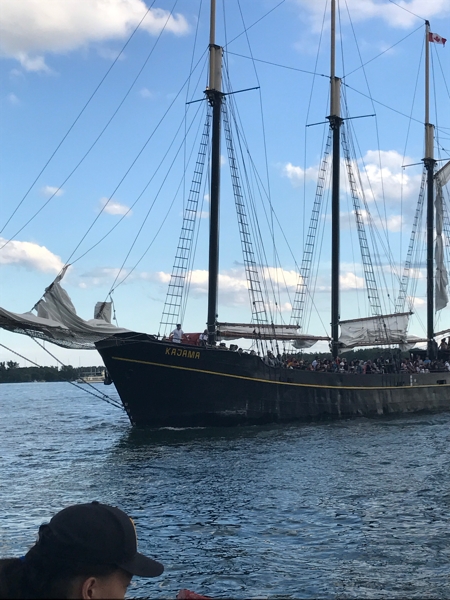 Here we see a boat full of refugees from Buffalo arriving, full of hope.  (This is not our boat.)

I thought we were going to sail on out to the Lake itself, but it was just a quick tour of the islands, which are more extensive than you might think.  People live there; there are businesses and beaches.  There are 250 homes out there, and you have to submit your name to a lottery to be put on a 500-person waiting list for the opportunity to buy one.  Since the 1990s when the lottery was instituted, fewer than 50 homes have been sold.  This despite the fact that you can’t have a car and the house must be your principal residence: there are no summer cottages out there.

There is a school out there, and about half its students commute from the city.

Anyway, some brilliant views of Toronto: 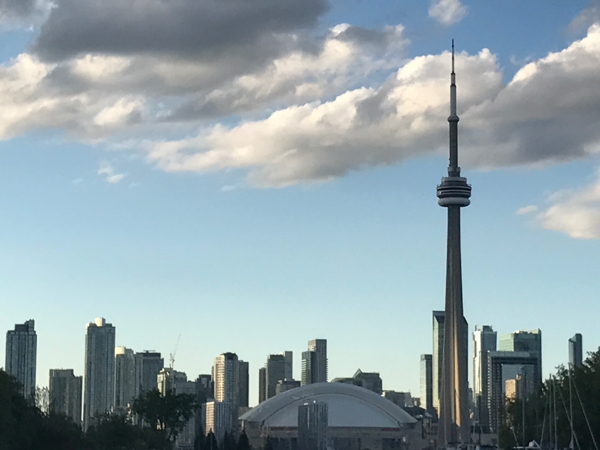 We did not go up in the CN Tower yet. 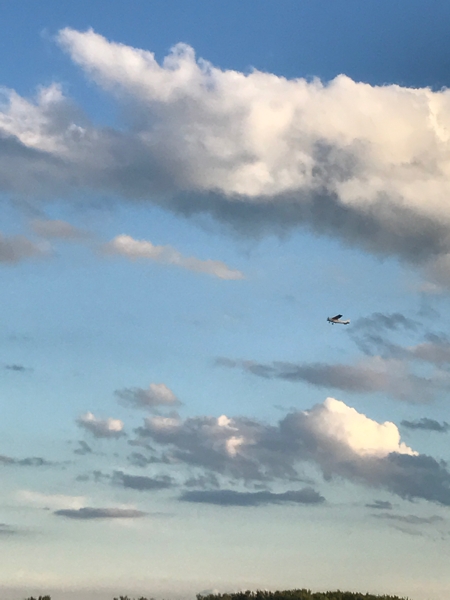 The last plane to freedom.

After the boat ride, everyone humored me to go find a topnotch cocktail bar.  The #1 bar, BarChef, is closed on Mondays, so I had settled on Bar Naval.  We hopped a cab and headed over. 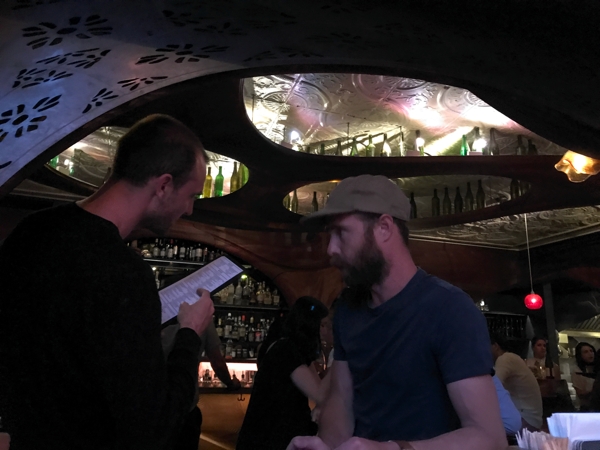 Super trendy, super small, and super loud.  We went to the patio; this view is looking back into the incredibly beautiful interior: all art nouveau wood and iron. 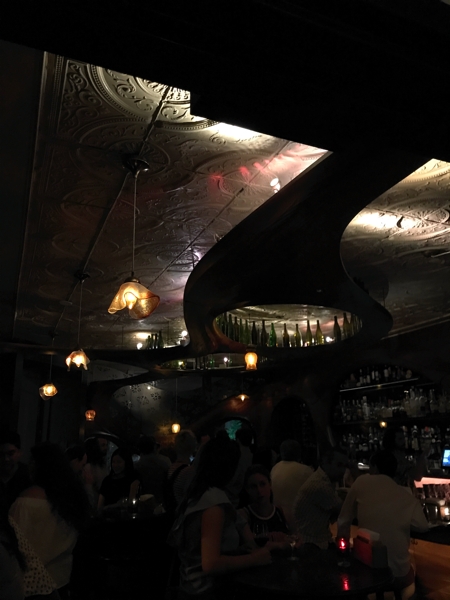 The stairs to the restrooms: 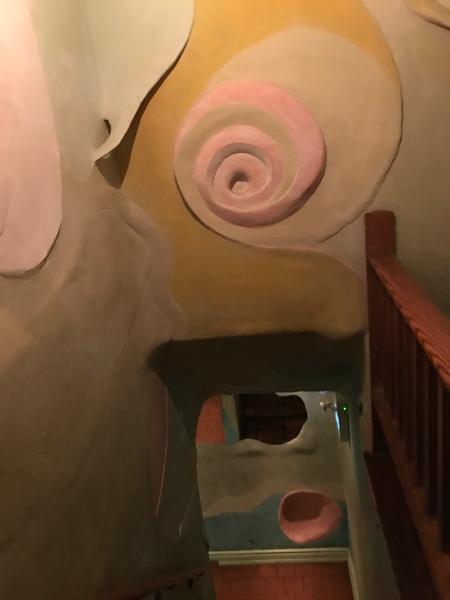 My first cocktail was the Absinthe Minded: vodka, lemon, some sherry, and absinthe.  It was bright and tasty. 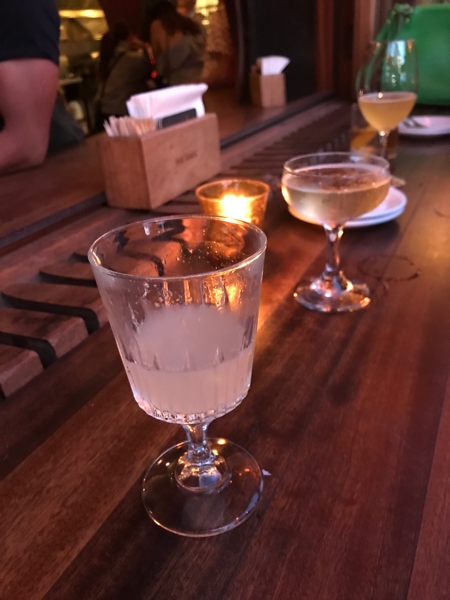 For my second, I pulled out my phone and showed the server the recipe for the Smoky Quartz.  I explained its origin, that I was not asking them to make it for me, but to make a cocktail that would please someone who liked it.

I thought that this could be a fun game, just going from world-class bar to world-class bar, and at each one challenging the bartenders to riff on the last bar’s creation.  Like a game of Telephone only with cocktails.  Great bartenders love that kind of thing.  (Jeff, this would be a good book, too.  I’ll need an expense account.)

Alas, the server apparently translated my intent incorrectly, because I think the bartender attempted to make the Smoky Quartz.  They didn’t have Angostura Amaro, so he/she just piled in regular Angostura bitters.  It was not a success. 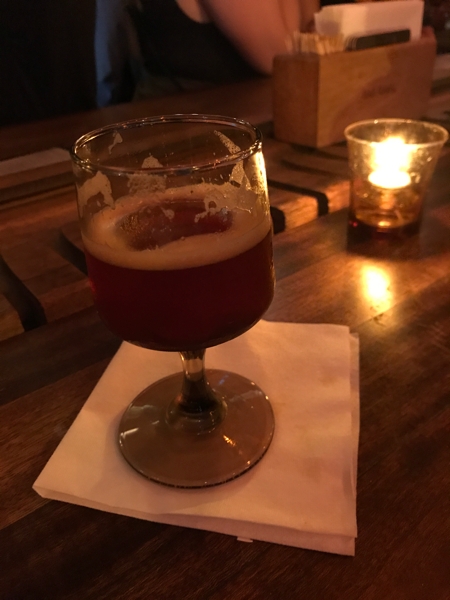 However, when I get home I’m going to try it with yellow Chartreuse (which is sweeter than green) and see if I can balance it out.

We asked where we might dine and were directed to a restaurant that either does not exist or if it does is closed on Monday anyway.  What is it with Canadians not knowing their own neighborhood?  There was an Italian diner whose sign had clearly not changed since it opened in the 60s, so in we went and were thoroughly entertained by our charming waiter and by the food.

Fed and satisfied, we headed back to the hotel and were in bed by midnight.  That’s right, we’re cool.

[1] For differing values of we.

[2] For differing values of our