On Saturday we motored over to Gray, GA, for Chaptacular, which — despite what conclusion your filthy mind has already leapt to—is actually an art event hosted by Chap Nelson on his spacious property as a fundraiser for the Cystic Fibrosis Foundation.

The full event name is Chaptacular Chainsaw Carving Bash, and it was more than, again, what you were expecting. 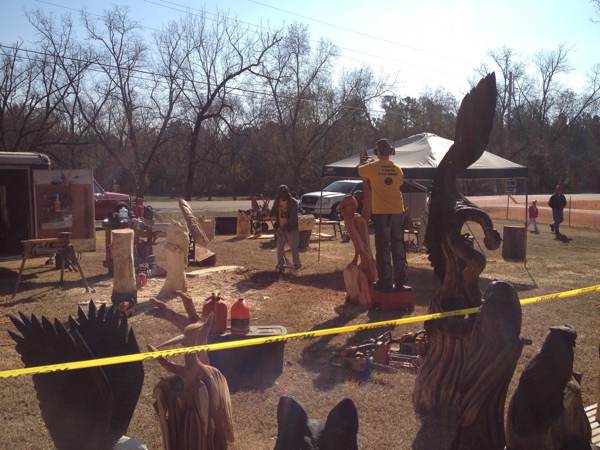 A lot of the work (all of which was for sale) was much what you would expect: 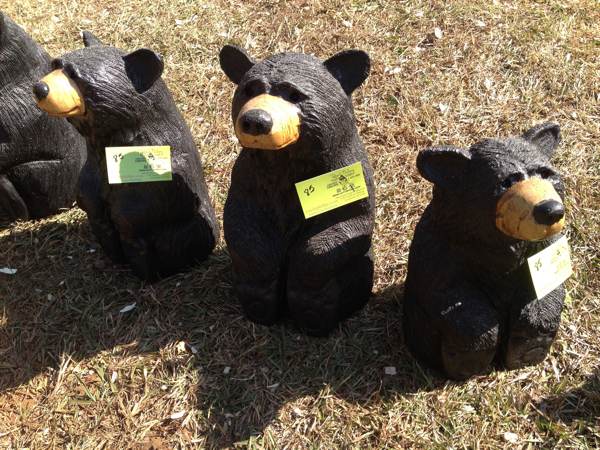 Lots and lots of bears: little ones, like these; big ones; happy ones; sad ones; silly ones.  You name it.  But there were other subjects as well: 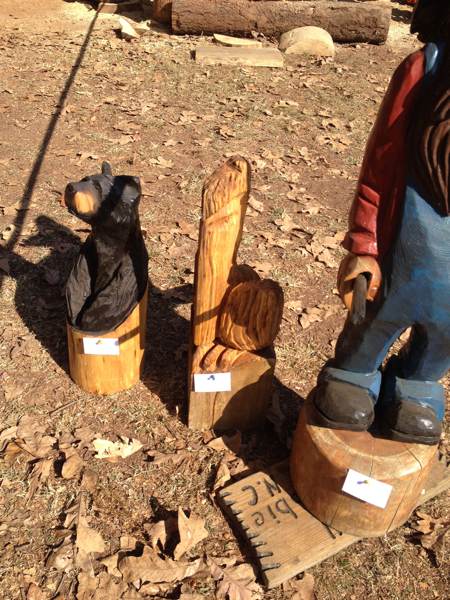 Stop it, you perverts!  That’s a pelican.  I think.  Lots of Green Men/wood spirits:

Watching these people work was fascinating.  It’s all I can do to cut a log in half with my chainsaw, and here they were wielding them with surgical precision.  Like “real” sculptors, they had a whole set of chainsaws in different sizes, plus buffers and grinders and sanders.

Soon after we arrived, most of the artists assembled for the “quick carve” event.  It’s mindblowing.  About a dozen of them stood in the carving area, each with a large block of wood and his tools, and after a brief intro from Mr. Nelson, they started their chainsaws up and went to work.

Go ahead, click on it.  It’s only 30 seconds long, and it’s tiny, unfortunately; if you do full-screen, it goes grainy.  Sorry.  But do look carefully at the man on the far right of the video, slightly behind the guy in front.

Here’s a good look at him from the other side, on the left.  For the longest time, all he did was saw straight down through his block.

Hold that thought.  After 20-30 minutes of ungodly noise—it really did become hysterically mind-numbing because nobody stopped, nobody paused even for breath—shapes began to emerge.

As you’re holding that thought about the short guy with the tall block, hold a new one about the young man on the right.

Here’s what the short guy ended up with:

This is the national champion, and he got here way faster than the other artists.  (Unfortunately, for our tastes, he ended up spray-painting the heron.)

Okay, back to the young man:

Ambitious, to say the least, and I don’t think he got it very finished by the time the carve was over.  But it was still amazing to watch.

It wasn’t all bears and green men:

These are inlaid with turquoise and crystals.  Not tremendously balanced, artistically-speaking-wise, but they were different from the surrounding work.

As you might suspect, most of the work was not something I would own, but as a demonstration of the creative process it was amazing.  It was the ultimate “take a block of wood and remove everything that isn’t a heron” experience.

The one piece I almost bought and would have if I still had two incomes:

It  would have gone in the southwest corner of the labyrinth, maybe.  Unless it proved to be too large to fit in, in which case I would have given it to Craig for his labyrinth.  (Who am I kidding?  I would have made it fit.)

Finally, if you’re in the market for a bear, this is the place to be.  They had an auction of pieces donated by the artists, all proceeds of which went to the CFF.  And good deals were to be had thereby.  I highly recommend marking your calendar for next year’s event.